Change your Microbiome and Change Your Health! 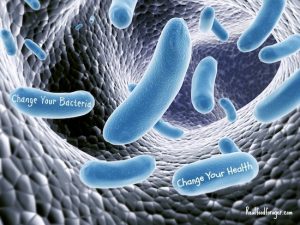 We know that our gut bacteria are a fundamental component of our essence. You can change your microbiome and change your health!

We can no longer separate our gut bacteria from who we are. Out of the emerging research on the microbiota and the microbiome, one thing is perfectly clear — the bacteria in our body outnumber us and probably outperform us.

Change your Microbiome and Change Your Health!

We house microbes in every part of our body — intestines, skin, mouth, to the tune of 100 trillion. That means that there are more bacterial cells in and on our bodies than there are cells that make up our body, tissues and organs.

Justin Sonnenburg, a microbiologist at Stanford, has said,

we would do well to begin regarding the human body as an elaborate vessel optimized for the growth and spread of our microbial inhabitants.

Interestingly, Dr. Natasha Campbell McBride has been talking about the gut bacteria for years and addressing imbalances in their diversity in her GAPS diet.

To describe what they are finding, scientists are inventing new terms, such as, microbiota (all the microbes in a community) and the microbiome ( their collective genes) and interestingly, ecosystem services (to describe the essential services of the bacteria).

As noted in a previous post about beneficial bacteria, they perform many essential services:

The Microbiota Do the Job Better

One theory to explain why all these important ecosystem services have been farmed out to bacteria is because they can evolve ever so quickly.

In many strains, there is a new generation in 20 minutes — a generation that can adapt to a new environment. These bacteria can trade genes and pieces of DNA — to fight off a new invader or a toxic food particle.

With this rate of evolution, they can survive the constant threats and challenges of the ever changing environment.

According to Joel Kimmons, a nutrition scientist and epidemiologist at the Centers for Disease Control and Prevention in Atlanta,

The bacteria in your gut are continually reading the environment and responding… They’re a microbial mirror of the changing world. And because they can evolve so quickly, they help our bodies respond to changes in our environment.

In the West, we are in the process of destroying our collective microbiome due to lifestyle, poor food quality with toxic additives, drugs, and medications.

Studies of the Microbiome of Isolated Cultures

María Gloria Dominguez-Bello, a microbiologist at New York University, is studying the gut microbiome of hunter gatherers in the Amazon in order to determine what a clean microbiome would look like.

We want to see how the human microbiota looks before antibiotics, before processed food, before modern birth… These samples are really gold.

She is finding that these samples have much greater biodiversity and higher levels of prevotella (these like fiber) bacteria than in the West. Interestingly, these Amerindians have much lower rates of allergies, asthma, atopic disease and chronic diseases.

Jeff Leach is busy mapping the diversity of the human gut with his American Gut project. He will also be able to compare the gut in the Western world with the Hadzabe hunter-gatherers in Tanzania who he has been studying.

These folks still hunt and forage many of the animals and plants that their/our ancestors ate, are covered in the same soil, drink the same water, and follow more or less a seasonal hunter-gatherer lifestyle that dominated the last two million plus years of human evolution.

In describing the procedure of the Hadza hunters in preparing a newly killed impala, Leach gives some insight into the extent of their exposure to all sorts of bacteria:

As they slowly and methodically dismembered the animal, they carefully placed the stomach and its still steaming contents on the fleshy side of the recently removed hide. In a separate area, they piled the fatty internal organs (which men are only allowed to eat by the way). Once the animal had been processed more or less, I was amazed to see all three men take a handful of the partially digested plant material from the recently removed stomach to scrub off the copious amounts of blood that now covered their hands and foreman’s. This was followed by a final “cleaning” with dry grass for good measure.

No antibacterial soap for the Hadza! It should be very interesting to see what their gut microbiome looks like!

Since scientists are reluctant to make statements that are not backed up by tons of studies, they hold back. But most agree that the Western diet is changing the gut microbiome in negative ways due to:

How To Nurture Your Microbiome

Michael Pollan, in this New York Times article in May 2013 called  Some of my Best Friends are Germs — asked the scientists working on these projects how to nurture your microbiome — but none wanted to make recommendations for the average person.

Pollan asked instead about how they have changed their lifestyle in light of all their research. This is what they said:

Interestingly, he quoted a gastroenterologist at the University of Pittsburgh — Dr. Stephen O’Keefe,

The big problem with the Western diet… is that it doesn’t feed the gut, only the upper G I. All the food has been processed to be readily absorbed, leaving nothing for the lower G I. But it turns out that one of the keys to health is fermentation in the large intestine.

Now that is something that is exactly the opposite of the SCD or GAPS diet — where we try to limit any fermentation in the large intestine and so starve out the bacteria. In these diets, it is very important to supplement with probiotic foods that have the good bacteria.

Pollan goes on to say,

And the key to feeding the fermentation in the large intestine is giving it lots of plants with their various types of fiber, including resistant starch (found in bananas, oats, beans); soluble fiber (in onions and other root vegetables and nuts); and insoluble fiber (in whole grains, especially bran and avocados).

However, some people do much better without all that fiber — especially from grains. I hope this new research will explain this and why many people with damaged guts do so well on the SCD and GAPS diets — diets low on fermentable starches.

We know how to feed our microbiome already — real food eaters have been saying this for years. Jeffrey Leach at American Gut has several suggestions for us based on his own research.

Of critical importance is the addition of fermented foods and beverages that add strains of bacteria and yeasts.

Start to introduce homemade yogurt, coconut milk yogurt, kefir, kombucha, beet kvass, sauerkraut, and pickles just to name a few. Incorporate these fermented foods into your diet in small portions at first as they pack a powerful amount of bacteria that can set off a Herxheimer reaction, or die-off, if introduced too quickly.

Those folks with a damaged microbiome may need more targeted treatments that restore the microbiome, such as Helminthic Therapy and Fecal Microbial Transplantation.

You Can Change Your Microbiome in Just Weeks or A Few Months!

With bacteria having the ability to reproduce every 20 minutes, you CAN change your microbiome in just a matter of weeks or months if you focus on eating bacteria-rich foods.

Cultured foods are a traditional way of preserving food and getting beneficial bacteria into the gut consistently.