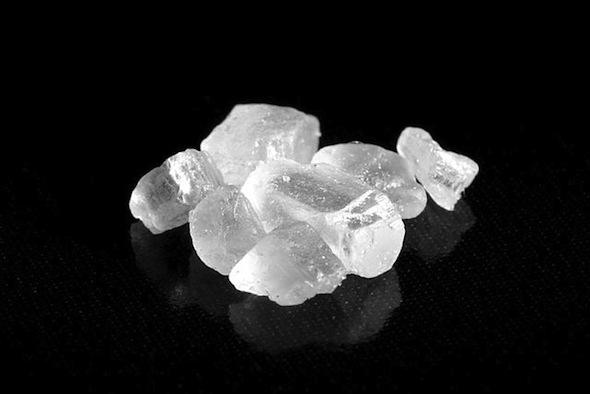 I go out of my way to add salt to my food. Salt is a taste we have on our tongue for a reason. Here’s 8 reasons to never follow a low salt diet.

I actually crave salt. Our blood and body fluids are salty. Salt is being demonized for raising blood pressure, but the evidence is just not there.

So what is the relationship between salt and blood pressure?

While reducing salt could, in 30% of the people, lower blood pressure by 3 – 4 mm hg (which is certainly negligible!), it may also raise blood pressure in 20% of the people by the same 3 – 4 mm hg. Once again, we see health officials establishing guidelines for all US citizens, based on poor science. In fact, there is plenty of recent research which suggests that lowering salt consumption is not only unnecessary, it is harmful.

They give you copious amounts of salt in the hospital

In emergency medical care, an IV saline drip is 3 liters a day at 0.9% sodium chloride. That translates to 27 gms of salt a day plus whatever is in the food, maybe 3 – 6 gms in the food. That is a total of up to 33 gms of salt a day in the hospital. Blood pressure is taken every 3 -4 hours as part of patient monitoring and clearly if that high amount of salt was causing high blood presure or any other problems, it would not be used.

The new guidelines recommend daily sodium intake of less than 2,300 mg among persons who are 51 and older and 1,500 mg for those of any age who are African American or have hypertension, diabetes, or chronic kidney disease.

This ignores or overlooks recent research that points to obesity and other causes, not salt, as the main culprit in rising blood pressure rates. Many nutritionists predict the guidelines will worsen, not improve, the obesity crisis, because people will consume more calories to satisfy their salt appetite for salt.

Morton Satin of the Salt Institute sets it straight

A molecular biologist by training, he is an internationally-known food industry and United Nations executive and author with extensive experience in all aspects of the food industry. He has been involved in the commercial food market for many years and has been one of the people responsible to bringing gluten-free foods to market as well as young coconut water in tetra paks (for which I am very grateful).

How blood pressure is regulated in the body

The RAS axis regulates sodium balance, fluid volume, and blood pressure. When blood pressure falls low, renin (an enzyme secreted by the kidney) is secreted, which triggers the plasma hormone angiotensinogen to release angiotensin I. This hormone is rapidly converted to angiotensin II, a powerful vasoconstrictor (something that tightens blood vessels).

Angiotension II also stimulates aldosterone secretion (from the adrenal cortex), which causes sodium retention, and an increase in blood pressure. This shuts off the signal for renin release in this negative feedback system.

So simple and elegant! But potentially dangerous

How do you get a chronically elevated RAS? By not eating enough salt! When sodium is low the RAS system is activated in order to preserve sodium.

This fact about how the blood pressure homeostatic system works is not taken into account by health bureaucrats, resulting in the radically misinformed guidelines set out by the government.

In our evolution, there have also been several other failsafe systems built into our biology to keep sodium from going too low. This indicates the utmost importance of adequate sodium to our well being.

A meta-analysis published 11/9/2011, in the American Journal of Hypertension confirms what the Salt Institute has been warning for years: that a low sodium diet triggers an increase in plasma renin, aldosterone, adrenaline and noradrenaline.

This is a dangerous chain reaction in the body that increases the following risks:

The effects of low salt on insulin

A study by R Garg et al from Brigham and Women’s Hospital and Harvard Medical School studied this very question. They took two large groups of healthy people and gave one group a low salt diet and the other a high salt diet. The low salt group developed insulin resistance in 7 days!

Why don’t our health officials from such prestigious organizations such as the Institute of Medicine and the American Public Health Association know this?

The effects of low salt on the cardiovascular system

A study published in the Journal of the American Medical Association by Katarzyna Stolarz-Skrzypek, MD, PhD, et al,(JAMA) involving 3,681 people, correlated salt intake with hypertension and cardiovascular disease and death. The results may surprise you. The researchers found that the people with greater salt intake had significantly lower rates of heart disease and mortality.

The associations between systolic pressure and sodium excretion did not translate into less morbidity or improved survival. On the contrary, low sodium excretion predicted higher cardiovascular mortality. Taken together, our current findings refute the estimates of computer models of lives saved and health care costs reduced with lower salt intake. They do also [sic] not support the current recommendations of a generalized and indiscriminate reduction of salt intake at the population level. However, they do not negate the blood pressure-lowering effects of a dietary salt reduction in hypertensive patients.

The effects of low salt on cognition

Most importantly, there are the cognitive effects of a low salt diet. Nerve transmission cannot occur without salt. A study from The Research Unit for the Study of Hydromineral Metabolism, Belgium, showed that low salt diets impair attention and gait in the elderly, putting them at risk for hip and other fractures. All nursing home patients are automatically put on low salt diets.

Watch this short video of Morton satin explaining recent research against salt reduction. It’s too late to voice your comments to the FDA but the video is very informative.

How much salt should we eat?

Mr. Satin researched military records in order to answer this question. He found that between the war of 1812 and WWII, people were eating 18 – 20 gms of salt a day! In those days everything was preserved with salt.

Today, around the world, people who can get salt, eat between 7 – 12 gms of salt a day. About half of what it used to be.

As the Cochrane Collaboration and U.S. Preventive Services Task Force agree, there is insufficient evidence of a health benefit for low-sodium diets. As evidence from three studies of the NHANES database for the U.S. and independent studies in Scotland and the Netherlands note, there is either an absence of cardiovascular health benefits for those on lower sodium diets — or an actual increase in risk for those following the recommendation to reduce dietary salt.

This is just another case of health bureaucrats from prestigious institutions who have based their careers on faulty data and now will never rescind the guidelines, even in the face of overwhelming evidence.

I know one thing, I’ll definitely be going out of my way to add a good quality sea salt to my food! Sea salt contains the important trace minerals and is minimally processed.

What about you? Leave a comment and let me know!