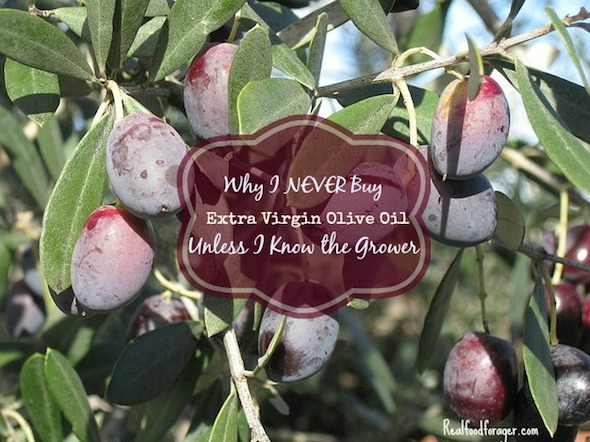 Until recently I didn’t tolerate olive oil well. Can you guess why? Here’s why I never buy extra virgin olive oil unless I know the grower.

Olive oil would make my skin break out even though I have never had an acne problem at all, ever.

Olive oil is supposed to be so healthy. Back in 2008 I was making my own salad dressing with expensive extra virgin olive oil and I suddenly had a face full of zits. I couldn’t figure out what was happening until I realized it was the olive oil in the salad dressing.

Or rather, the other, poor quality oils hidden in the bottle.

It turns out that most commercial olive oil (even the ones in the fancy bottles) are tainted with cheaper oils like soybean oil – probably genetically engineered soybean oil.

In his shocking book Extra Virginity: The Sublime and Scandalous World of Olive Oil, the author, Tom Mueller, goes into the sordid history of olive oil making in Italy and other parts of the world. Apparently, cutting extra virgin olive oil with cheaper oils has been going on for centuries – back to the Romans!

According to Mueller, as discovered at Ebla in the 5,000 year old cuneiform tablets, the Sumerians had a royally appointed olive oil fraud brigade to combat oil fraud. Back then, the oil was cut with cheaper olive oils or with liquefied lard.

Olive Oil was at the Center of Commerce

In Cyprus, a rare archeological find by Maria Rosaria Bellgiorno in 2007 exposed a conglomeration of industries with olive oil at the heart. These industries included perfume making, metallurgy and textiles as well as other commodities such as, skin lotion, medicine and lamp fuel — all using olive oil.

Olive oil was the greatest renewable energy source in antiquity…

Four thousand years ago olive oil was already a driving force in the world.

I later found out from reading the book, that in 2008 there was an investigation into the olive oil debacle called Operation Golden Oil. This investigation lead to the arrest of 23 people and the appropriation of 85 orchards.

The crux of the matter is that suppliers are importing oil from Tunisia, Greece and Spain and re-labelling it as Italian oil. Other tactics include labeling inferior oil as extra virgin olive oil and claiming EU subsidies for growing olives in Italy while actually importing them from elsewhere.

This corruption of the oil due to industry tactics makes most commercial olive oil much less healthy. The delicate mono-unsaturated fats in olive oil must be handled with care in order to preserve the enzymes and vitamins. The mixing of other poly-unsaturated vegetable oils which are highly refined, rancid and genetically modified negates the benefits of the olive oil.

It’s very likely that the extra virgin olive oil you are using is not healthy at all.

How Can You Know Your Olive Oil is the Real Deal?

For many, in the olive oil trade, tasting olive oil is as much of an art as is wine tasting. It has a strict protocol and even a school to train tasters. The National Organization of Olive Oil Tasters developed the taste test protocol that forms the core of IOC, EU, USDA and other olive oil grading methods.

It’s hard to tell by taste alone. The counterfeiters usually leave just enough of the good stuff to make it taste good — or it is so adulterated the rancid oil taste is disguised with flavorings.

According to Nancy Ash, one of the most respected tasting experts in the U.S.

Flavors in olive oil are determined by a wide range of factors including the type of olive (varietal), ripeness at harvest, growing conditions (climate, soil type), crop maintenance (irrigation, pest control), handling of fruit from tree to mill, and the milling process itself.

The first step is to smell the aroma of the oil, then to sip it and take in air at the same time, making a slurping noise. This  emulsifies the oil with air that helps to spread it throughout your mouth. Finally take note of whether or not it has a peppery sting at the back of your throat when you swallow it. It should.

It has been noted that even experienced olive oil tasters may be fooled by the adulterated oils being sold.

Solidification When in the Refrigerator

Additionally, an extra virgin olive oil that has other, lower quality olive oils will still become solid when cold.

If the oil does not solidify at all — that may or may not be a phony olive oil because some true extra virgin olive oils are winterized — that is they are chilled and filtered in order to keep them pourable when cold. Iin this case, you would think it was phony, but it is real.

Able to Burn a Wick

Pure extra virgin olive oil should be able to burn — they used the oil to burn in lamps. If your oil does not burn a wick at all — that is clearly a sign that it is not olive oil.  It may be adulterated with some olive oil that will burn so this is also not complete proof that it is the real deal.

I get my grassfed food from farmers I know and trust because I have met them, spoken with them and discovered how dedicated they are to producing the very best food on the planet.

The same goes for extra virgin olive oil. It is an investment in your health to get the very best food. The fats are a critical part of the real food journey and how to get healthier. The whole point of using the correct fats and oils is for the incredible benefits they lend to our health. If they are cheapened through unethical suppliers and middlemen, the health benefits are lost.

At UC Davis, the Olive Center performs testing of olive oil samples by professional in their labs. They have found that the top selling brands of “extra virgin” olive oil being sold in the US and California often fail the IOC sensory standards for extra virgin olive oil.

Their testing indicated that the samples failed for the following reasons:

The bottom line is, it’s best to buy from growers that you know. Local, family growers that bottle their oil on or near the premises, without the use of middlemen is the way to go. These growers usually have heritage olives and they grow them ethically.

I live in New York which is certainly not conducive to olive growing, so I set out to find a source for true certified organic extra virgin olive oil — organic because olives are heavily sprayed with pesticides. Actually, this brand of olive oil found me — but that’s a story for another day.