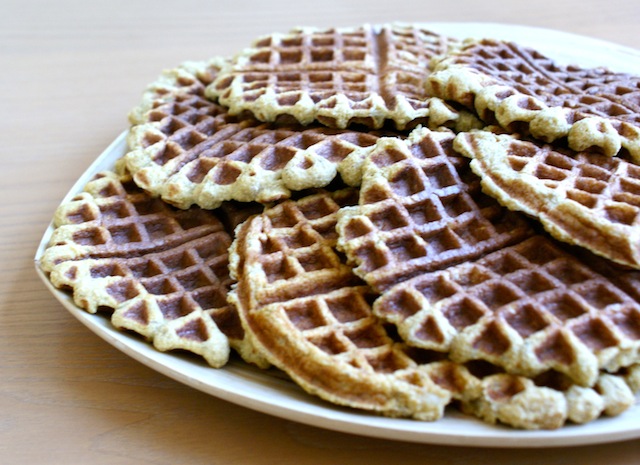 Waffles go back to ancient Greece, Medieval France and are mentioned in the Canterbury Tales by Geoffrey Chaucer (14th century) as a tool for courtship…”He sent her sweetened wine and well-spiced ale/ And waffles piping hot out of the fire.” What a guy!

Waffles were first introduced to North America in 1620 by Pilgrims from Holland. Thomas Jefferson brought a waffle iron from France, and waffle parties became popular in the late 18th century. Americans got their first taste of Belgian waffles — which are leavened with yeast and egg whites — at the 1964 World’s Fair. My husband remembers that as if it were yesterday because that is where he fell in love with waffles.

When we went grain-free it became a challenge to come up with a suitable waffle recipe — one that was light and tasty. We found that nut flours made the batter too heavy so we started experimenting with coconut flour. This recipe is a winner: light and sweet, it is good as a breakfast or dessert depending on what topping you choose.