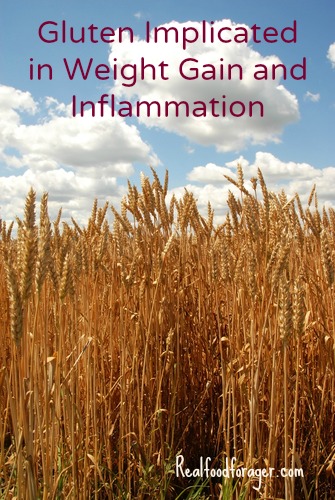 A new study published in the International Journal of Obesity, March 2016, reports that gluten is implicated in weight gain and inflammation.

I’ve noticed in my patients and myself that eating gluten encourages and supports weight gain and difficulty in losing weight.

The researchers looked at body weight, fat deposits, markers of metabolism, gluten absorption and biodistribution, and markers of inflammation.

The results are interesting and support what many clinicians (and myself) have found with patients.

The researchers found that the groups of mice eating gluten had 20% higher body weight and 30% more fat deposits compared to their controls, despite eating the same number of calories.

Additionally, the mice fed gluten had decreased thermogenesis (a marker of a slower metabolism), decreased energy expenditure, and lower conversion of white fat to brown fat (brown fat burns energy to produce heat compared to white fat which stores energy). Brown fat is found in hibernating bears and is the way they keep warm.

The fascinating part of the study revealed that fragments of gluten proteins were found intact in the blood, liver and fat deposits of the mice. This indicates that the gluten peptides actually leave the gastrointestinal tract through the mucosal barrier and get into the blood, tissues and cells of the body.

These gluten peptides can influence what happens in these tissues outside of the GI tract. Additionally, they found that this can happen even if there is no genetic predisposition. This indicates that gluten can reach extraintestinal organs – something we know happens in humans by the clinical presentation of inflammation in joints, brain and other tissues and organs.

Clearly, this study elucidates what we have been saying in the grain-free, Paleo communities for years – wheat and particularly the gluten proteins are unhealthy for many people – way beyond just people with the genetics for celiac disease. Gluten proteins encourage and support inflammation in the body which is the root cause of many diseases if not all, and they support weight gain and difficulty losing weight.

What we need now are human studies that follow this same methodology that strictly compares diets with and without gluten.

I have personally found that when I eat gluten and grains on a daily basis, I can put on weight very quickly. I have also found that when my patients go on a grain-free diet it facilitates weight loss.

What have you found? Does a grain or gluten free diet help you feel better and lose weight? Leave a comment and let me know!

Get my FREE grain free recipe e-book and my FREE Getting Started series to kick off your real food journey when you sign up for my newsletter.

Yet Another Reason To Avoid Wheat – New study

Why I Gave Up on Sprouted Grains