Antibiotic Resistant Bacteria Look Out – Bacillus Subtilis to the Rescue! 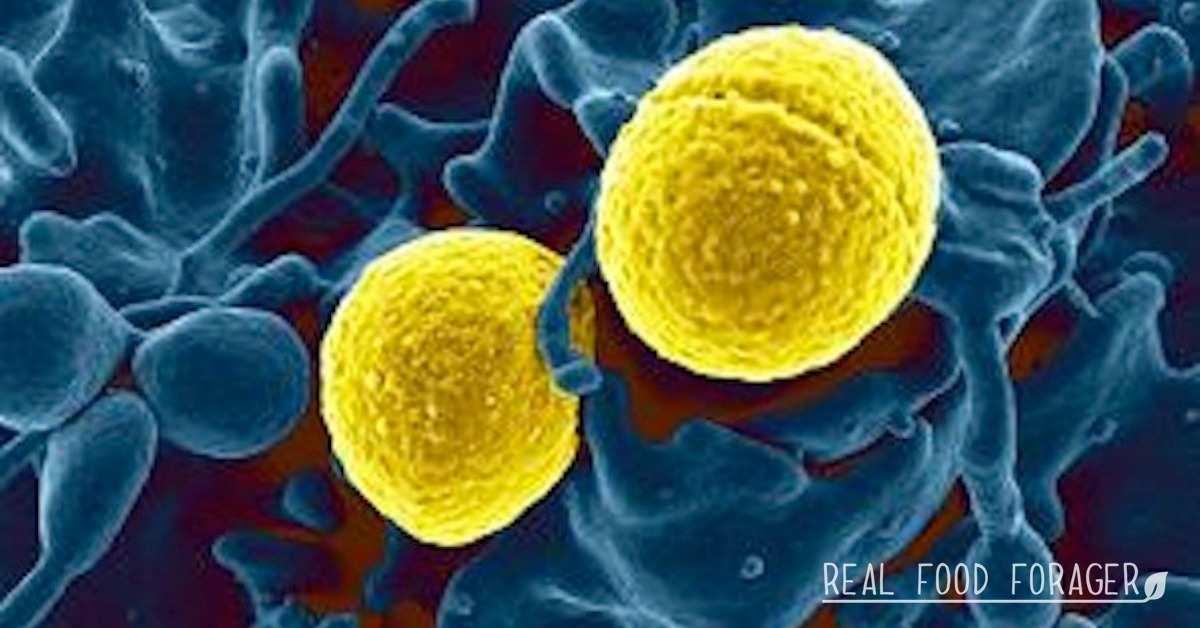 A newly published study presents a common, safe and effective probiotic bacteria that can help control pathogenic populations in the gut!

Spores Vs. Soil Based Organisms

Additionally, some soil based organisms are spores, but not all.

But, their home is actually the human gut and they are called human gut commensals, because they blossom out of the spore once they hit a favorable environment – which is the human intestine.

This study published in 2009 by Hong at Royal Holloway, London University showed that when you look at the concentration of bacillus endospores in the human gut, there is a magnitude of 2 higher than what you find in the soil.

This indicates that they actually use the soil as a way to get from host to host.

But their home is in the gut.

Outside of the human gut, they are in this spore form and they are metabolically inactive.

The spore is basically a calcified coating that is resistant to the low pH of the stomach, the bile salts,  the body heat (which kills most lacto and bifido strains as they journey through the GI system) and even irradiation.

When they reach the upper colon, they blossom out of the spore coating and become a live functioning probiotic in the gut.

One particular strain has been used for many years as an anti-bacterial.

Bacillus Subtilis is a Natural Anti-Microbial

As early as 1952, there have been drugs that use Bacillus subtilis to treat gut infections.

Interestingly, the first use of a commensal bacteria as an anti-bacterial was discovered by the German army.  During World War II they were in North Africa and the soldiers in the German army were dying more from dysentery than the actual fighting.

They observed that when the locals would get sick, especially with diarrhea, they would consume dried camel dung as a medicine to alleviate the infection and the resulting diarrhea.

The Germans took the camel dung back and they researched it. They found Bacillus subtilis in really high concentrations.

These bacteria use a specialized mechanism called quorum sensing, where bacteria read one another’s signature. Or, you can think of quorum sensing as a way of communicating.

They have the capability of finding overgrown or pathogenic organisms, sit next to them and actually produce the antibiotics to kill them off.

It has been shown that Bacillus subtilis can product up to 12 different antibiotics.

This is specifically targeted to keep down the pathogen populations in the human gut.

By keeping down the pathogen populations, it allows the individual’s indigenous lacto and bidfido strains to come back up.

We know that babies pick up their microbiome as they pass through the vaginal canal. However, environmental influences make an impact on the health of our microbiome.

In cases of dybiosis, adding spore bacteria that have the ability to communicate with each other and produce anti-microbials in order to keep down pathogen populations, is a sure way towards a better balance in the microbiome and a step towards better health.

You might also be interested in Your Baby’s Microbiome Starts with the First Sip of Breast Milk.

A recent study by investigators from the National Institute of Allergy and Infectious Diseases (NIAID), with colleagues from academic institutions in Thailand finds Methicillin-resistant Staphylococcus aureus (MRSA) can be eliminated by Bacillus subtilis.

The mechanism for putting down pathogens was previously thought to be crowding out.

However, this study shows that Bacillus species have specific lipopeptides called fengycins which have the ability to eliminate S. arueus…

…by inhibiting S. aureus quorum sensing—a process through which bacteria respond to their population density by altering gene regulation. Our study presents a detailed molecular mechanism that underlines the importance of probiotic nutrition in reducing infectious disease. We also provide evidence that supports the biological significance of probiotic bacterial interference in humans, and show that such interference can be achieved by blocking a pathogen’s signalling system. Furthermore, our findings suggest a probiotic-based method for S. aureus decolonization and new ways to fight S. aureus infections. (source)

The researchers analyzed 101 stool samples from people in rural Thailand – a population less likely to have been exposed to antibiotics and/or food sterilization.

They looked for the absence of S. aureus and which bacterial strains were associated with that absence.

When the researchers collected more samples from both the gut and the nose and tested them for the presence of S. aureus, they noted that the samples that contained Bacillus did not feature S. aureus and vice versa. (source)

The researchers went even further and did some tests with mice to investigate the mechanism by which Bacillus inhibited S. aureus.

Apparently S aureus has a specialized system that allows them to colonize and grow.

These fengycins are able to inhibit the growth of many of the S. aureus strains, including USA300, which is a powerful superbug and one of the most threatening antibiotic resistant bacteria.

The researchers infected the mice with S. aureus and then introduced Bacillus subtilis spores.

The rodents that received this treatment once every other day soon became free of S. aureus in their guts.

Of course further studies are needed in humans.

Ultimately, we hope to determine if a simple probiotic regimen can be used to reduce MRSA infection rates in hospitals,” says the study’s lead investigator, Michael Otto. (source)

The Benefits of Bacillus Subtilis

In a study using a Continuous Model of the gut, researchers studied the HU58 strain of B. subtilis.

This study was completed at a 3rd party independent research company called ProDigest. They specialize in digestive studies.

This study was commissioned by the producers of Just Thrive Probiotic and is available to read here.

The researchers found some very exciting results about B. subtilis HU58:

Butyrate is a powerfully protective substance that most of us do not have enough of. Just the benefit of increased butyrate alone would cause me to want to take this probiotic!

Butyrate is a critical energy source for the colonic cells, which protects the cells from uncontrolled growth (tumor growth). Butyrate is also known as an immune system modulator, which can help tamp down an over-active immune system in the gut.

Find out more about the benefits of butyrate here.

Where to Get Spore Bacteria

There are not many brands of spore bacteria and those that are available have only one or two strains. The best over-the-counter spore probiotic is Just Thrive. It has 4 strains of important spore bacteria.

Go here to learn more or purchase and use coupon code FORAGER10 to save 10%!

If you are a health practitioner you can provide your patients with an even stronger version of Just Thrive spore probiotic with Megaspore from Microbiome labs.

If you are a health practitioner and would like to get more information about using Megaspore in your practice, please contact me at [email protected]

Full Disclosure: I am currently an account manager (NY/NJ) for Megaspore – the company that supplies the spores for Just Thrive. However, I wouldn’t be working for the company if I didn’t think the product was excellent. I have been following Kiran Krishnan for a few years, and ended up working for his excellent company.