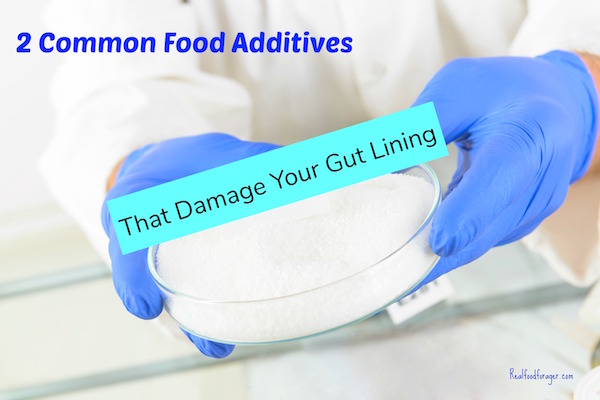 While food additives may seem innocuous, because health officials list them as GRAS (generally recognized as safe), many of them are far from it! Carrageenan and titanium dioxide are particularly worrisome.

Intuitively, we know that eating processed foods with lots of chemical additives is not a good idea for anyone. When you have IBD, or any autoimmune disease, you have to be especially careful of certain additives.

These chemicals are added to processed foods, cosmetics, personal care products and medications. Even a small amount can contribute to the inflammation that drives the disease.

However, most specialists – particularly gastroenterologists – still maintain that food does not affect the condition!

Now we have more science (if one needs to have studies to prove things that are common sense), that proves that nutritionists have been right all along.

For instance, we know – and have known for years – that carrageenan can cause ulcerative colitis symptoms in laboratory mice. From this we can extrapolate that this additive can be harmful to humans with the condition – as well as people without the condition.

There are numerous studies about colitis and carregeenan. In fact, they use it to induce colitis in mice in order to study bowel disease.

Clearly, it should not be in any food for humans!

Chronic inflammatory diseases are on the rise in the past 60 years. This includes inflammatory bowel diseases and metabolic syndrome – which includes insulin resistance, abnormal cholesterol levels, high blood sugar levels, excess body fat around the waist and increased blood pressure.

For instance, previous studies have found that the food additive, carregeenan can induce ulcerative colitis in mice (here) and (here). Additionally, both degraded and undegraded carrageenan have been found to promote cancer.

This study published in Environmental Health Perspectives, led by J K Tobacman, a well known researcher in this field has concluded that,

While there is a difference between degraded and undegraded carrageenan, (read more about that here), it is clear that both forms of carrageenan can induce inflammation in the body and is best avoided.

It is typically added to give the foods a thicker consistency and to make low-fat versions taste fuller. It is derived from red algae so you may think it is natural.

It is anything but…

Carrageenan has been listed as a substance generally recognized as safe (GRAS) since 1973,  but it has been shown to have an extremely detrimental effect on mammals.

According to Dr. Jockers,

Due to the variations in people’s intestinal microflora, or bacteria contained in the gut, researchers suggests that the additive may promote inflammation by altering the type of bacteria present following the consumption of carrageenan. Symptoms associated with altered bacteria concentrations within the gut include inflammatory colon polyps and abnormal tissue growth which can be signs of a more serious health problem.

Studies even propose that the body exhibits the same response to carrageenan as it does to a bacterial infection from Salmonella and its development of disease.

Triggered by a common food additive that irritates and ulcerates the gut lining – something that we have known for years but the FDA has said is generally recognized as safe.

At least now, with all this new research around the microbiome, we will see the relationship between these food additives and pathogenic infiltration of the gut lining that induces inflammation and disease.

A recent study found that another additive – titanium dioxide has been found to exacerbate IBD (Crohn’s and Ulcerative Colitis).

Titanium dioxide nanoparticles can be found in bright white medications, tooth paste, cosmetics and as a food additive.

It’s also in sunscreen. It’s actually a good sun block, but the nanoparticles are absorbed right through the skin.

Oral administration of TiO2 nanoparticles worsened acute colitis through a mechanism involving the NLRP3 inflammasome. Importantly, crystals were found to accumulate in spleen of TiO2-administered mice. In vitro, TiO2 particles were taken up by IECs … [they] also induced reactive oxygen species generation and increased epithelial permeability in IEC monolayers. Increased levels of titanium were found in blood of patients with UC having active disease.

Wow. This really exposes the safety issue around titanium dioxide. It appears to be accumulating in the spleen, taken up by the intestinal cells, inducing inflammation, increasing leaky gut and finding its way to the blood of people with UC.

Aditionally, polymorphisms in the NLRP3 gene have been linked to the development of Crohn’s disease.

These findings indicate that individuals with a defective intestinal barrier function and pre-existing inflammatory condition, such as IBD, might be negatively impacted by the use of TiO2 nanoparticles.

I would also go so far to say that anyone concerned about their health should be aware of these ingredients in any packaged or processed foods they eat.

The solution is to make your own foods at home, so that you know exactly what is in it!

Starting on your real food transition?

Sign up for my newsletter and get my free  Getting Started series of emails as well as a free ebook of my favorite grain free recipes!

New Research: Impact of Food Additives on the Gut Microbiome