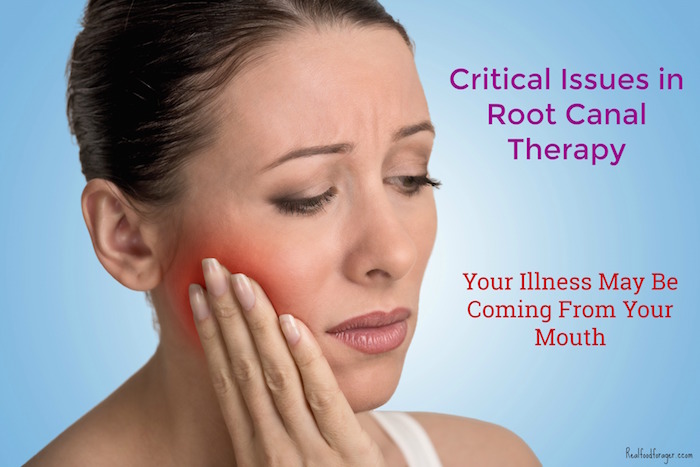 It is a bad idea to keep dead and potentially gangrenous tissue in the body. However, it is totally acceptable in dentistry. It is called root canal therapy.

After a root canal, it can take a long time before clinical symptoms develop. This makes it hard to correlate the health problem to the root canal. But we know better now and many biologically trained dentists are sounding the alarm.

In the 1930’s and 1940’s Dr. Price studied studied the effects of root canal teeth on over 60,000 rabbits. His theory was that the bacteria left in the root canal tooth could cause an illness. He proved this by implanting root canal teeth extracted from humans, under the skin of the rabbits.

For instance, Dr. Price took a root canal tooth from a person who had rheumatoid arthritis and implanted the tip of that tooth root under the skin of a rabbit.

The rabbit developed rheumatoid arthritis. He also studied heart disease and found that this disease was passed on to rabbits in the same way.

Dr. Price found that the only way to stop this progression of the root canal tooth from passing on the disease was to boil the tooth in water for 30 minutes.

See Root Canal Cover-up by George Meinig, for more of this research from Dr. Price.

The root of a tooth goes underneath the enamel and is a tubular structure. The canal opens at the end of the root and there are blood vessels, nerve fibers and connective tissue encased in the tubules of the dentin. These run from the inside of the tooth to the outside of the tooth and connect with the rest of the body.

The end of the root is an open hole.

The dentin is a tubular structure that contains soft tissue – much like the roots of a tree. Research indicates that no matter which technique is used to clean out the canal, between 30 and 50 percent of the surface of the canal will remain untouched.

Counting all the teeth in a mouth, there are miles of tubules. It has been suggested that the average front tooth has approximately 3 miles of tubules through it (if stacked end to end). The diameter of a tubule can accommodate up to 5 bacteria across – housing billions of bacteria.

All this tissue is potentially gangrenous.  No other health profession would allow you to maintain any other appendage in this condition. They would recommend amputation.

It is Impossible to Sterilize the Tooth

A tooth is a living tissue. As noted above, part of the tooth, the dentin, is made up of tiny tubes, called tubules. When the tooth is alive, there is circulation of blood and fluid through the tubules. This helps to cleanse and maintain a healthy microbial balance within the tubules.

The root canal procedure stops the flow of blood into the tooth which kills the tooth. While the surfaces may appear to be sterile, there is no way to maintain healthy microbial balance within the tubules once the circulation has stopped.

Additionally, bacteria change and mutate when the environment changes. With a root canal tooth – now a dead tissue with no flow of fluids – the environment becomes a low oxygen environment. This can encourage the growth of pathogenic bacteria, which produce powerful toxins.

Dr. George Mening, was a founding member of the Association of endodontics. When he wrote and published his book, Root Canal Coverup he was kicked out of the organization.

Conventional Endodontists feel that a successful root canal therapy is one that no longer hurts. Most patients feel the same way.

However, if they counted the disease states that can occur from these diseased teeth, there would be many more failures.

Dr. Price found the only way to sterilize the tooth is to boil it for 30 minutes. During the root canal procedure there are various antibiotics put into the tooth to kill the bacteria. However, the antibiotics cannot get very far down the tooth or tubules. The result is the bacteria become resistant to the antibiotic and infect other areas in the body.

This is another cause of antibiotic resistant bacteria.

There are other issues to be concerned about during the root canal procedure. There are chemical substances and medications used to sterilize the tooth and to fill the pulp chamber during the procedure. These can be cytotoxic or carcinogenic and yet, they still do not kill the bacteria. Still other issues include:

Relationship of Teeth To The Rest of the Body

Each tooth sits on an acupuncture meridan, which creates an energetic relationship between each tooth with various organs in the body. Check out this chart that shows the relationships.

The body has an innate ability to heal itself, as long as there are no impediments to healing. There can be many obstacles to healing – one of which is a root canal.

Removing the root canal tooth removes the neural interference and allows the body’s energy to flow properly through the meridian again. Once these impediments are removed, then healing can occur.

Dr. Price studied over 1600 patients for 3 generations. He found that some people would tolerate the root canals better than others. He separated them into 3 groups:

The more root canal teeth – the greater the toxic load and the worse it is for the patient.

Dr. Haley studied root canal teeth for their level of toxicity within. He measured bacteria and the toxins they produce. What he found is both interesting and frightening at the same time.

So, 25% of the root canal teeth studies (out of the 900 he studied), had some seriously pathogenic bacteria that produced potentially lethal substances…

Knowing all this has truly turned me off to root canals. But I have to ask myself – does knowing the truth about root canals change what I would do if I had to have a root canal in order to save a tooth? Honestly, it would be a very difficult decision, because once you pull a tooth, you do need to make more decisions about what to replace it with.

Find out what I did to replace a pulled root canal tooth.

Of course, you could just leave the space, but that can cause problems down the road and if it is a front tooth, for cosmetic reasons it would be hard to leave open.

Have you been faced with this situation? What did you do about it? Leave a comment and let me know!

Speaking about dental health, my friends at Orawellness are celebrating their 24th anniversary and giving a whooping 24% off all their products! Hurry! The sale ends August 27!

This is when I stock up on my favorite Healthy Mouth Blend that saved me from having gum surgery from pockets! I have no pockets now!

If you are just getting started you might want to order the Healthy Mouth System.

Use coupon code happy24 at checkout!