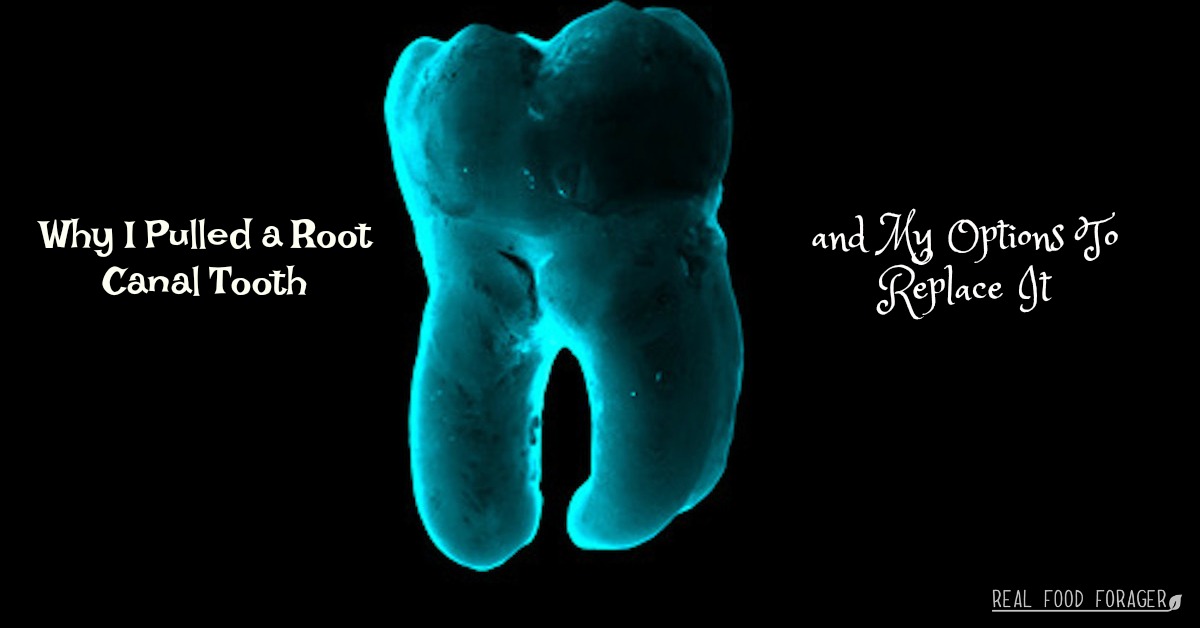 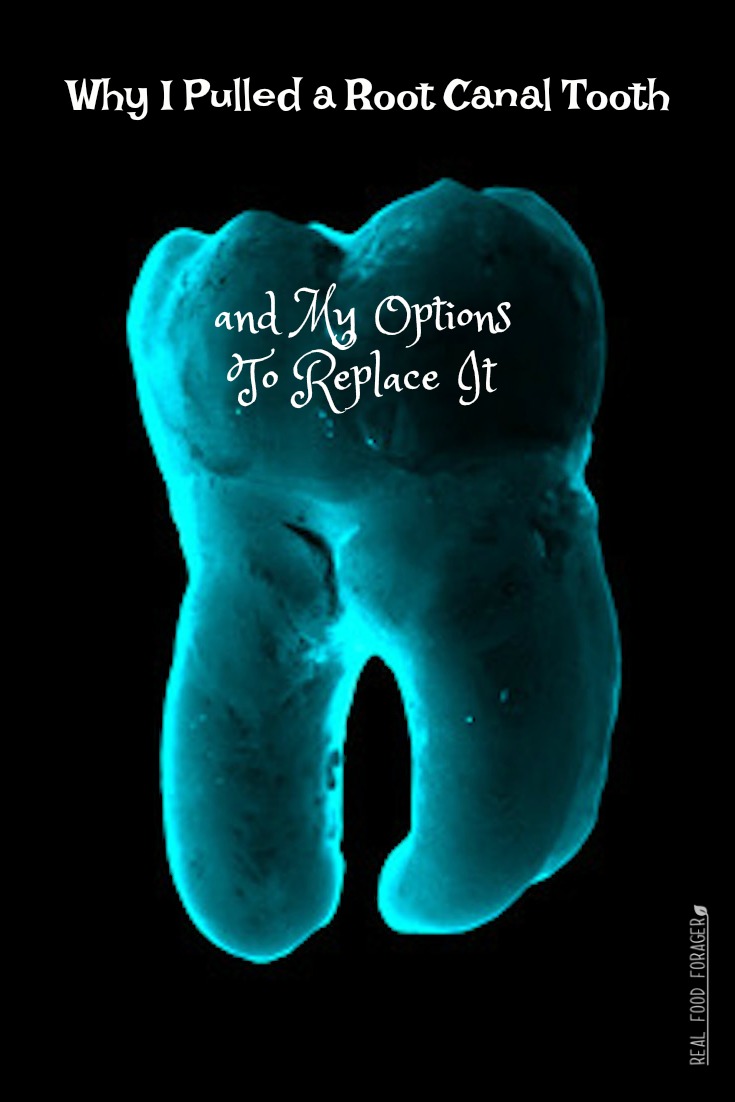 It was inevitable. I had a 30 year old root canal disintegrating. Here’s why I pulled a root canal tooth and my options to replace it.

It was in my first lower molar (#30) performed over 30 years ago. I’d say that is long enough to house dead tissue in my mouth.

Root Canals are Dangerous to Health

In the holistic dental community, housing a root canal tooth is a danger to your health. Knowing that, I’m of two minds about it – sad to get a tooth pulled, yet glad to see it go.

Years ago, when I heard about the problems with root canal teeth, I thought about having mine pulled. But when I had to consider how to replace it, I decided that I would leave it alone until it failed.

Well, it has failed – the gum was receding and a cavity formed in the softer tissue of the exposed root. This led to decay under the crown. I did not for one minute think of trying to save this root canal tooth it at this point.

Number 30, a first molar molar, is a major tooth and when it is gone it leaves a BIG space. For a while, I played with the idea of leaving it alone – not choosing any of the following options. But #30 is a major player in chewing and leaving a large space invites your other teeth to move out of alignment.

Not good for your teeth or your gums.

I was nervous about the extraction. I had had one wisdom tooth extracted as a teenager but I do not remember anything about it. I elected to have this extraction done with local anesthetic. As it turned out, the tooth in question had short roots in addition to being a root canal tooth. I felt that it was already compromised and with the short roots would be an easy extraction.

I didn’t even know it was out when they told me it was done.

I asked the surgeon to clean the area so that no tissue was left inside. If the apical ligament is left, there is a possibility that a cavitation can occur. That is simply a space where bacteria can collect under the gum.

You don’t want that. Hopefully, he took care of that for me.

As a practitioner I tend to instruct other practitioners on what I want done, even when I am not an expert in the field, but merely an informed consumer. I have trouble handing over the decisions to another doctor – sometimes that works in my favor and sometimes it does not.

I try to inform myself of any possibilities, but researching is not the same as having clinical experience, which is why you have to choose a doctor that you trust and who is on the same page as you.

If you are a dental professional and I have misstated any procedures, please feel free to make corrections in the comments below.

The Options for Replacing a Pulled Tooth

According to the American Dental Association (ADA) there are three options:

These three options are probably what would be recommended from your typical dentist. However, there is actually a 4th option called a composite bridge that not all dentists know how to perform. According to the folks at Orawellness,

Dr. Ronald Carlson, a biological dentist in Hawaii, has a kit that he sells to dentists to educate them on what they need to build a composite bridge.  Called the Carlson Bridge ‘winged pontic’, this kit is something your local dentist could purchase for you upon your request. (source)

Finally, there is the 5th option and that is to do nothing. Just leave the space there. Most would argue that this is not a good option as the teeth can move and misalign and this could affect gum health as well.

The most important issue about leaving a gap is due to the risk of losing bone density at the site of the pulled tooth. If you do not chew and bite down on things in your mouth, your jaw bone is not stressed. When a bone is not stressed – that is, exercised – bone loss occurs. This issue informs us how critical it is to have a normal bite and having the ability to chew properly on both side of the mouth.

Dental implants may be used to replace a single tooth, several teeth or even as a support for a full set of new dentures. This is a surgical procedure where a metal (usually titanium) post is implanted in the bone tissue of the jaw. This will support a crown that looks just like a natural tooth and is very strong.

While this may vary for each individual, generally the process involves:

The Benefits of Implants

An implant looks like a natural tooth and they say, the implant can last for decades.

Additionally, an implant can help prevent bone loss when a tooth is missing. The implant will activate the jaw bone when chewing on that surface occurs.

The Downside of Implants

The material used in an implant is usually titanium, which is said to be accepted by the human body. From a holistic point of view, this may or may not be true for everyone. Just as they believed mercury amalgams were safe, so they say titanium is safe. It is still a metal and for those of us who have spent time and money getting their mercury amalgams removed, it would seen counterproductive to have yet another metal placed in the mouth.

Another option is zirconia as this is said to be relatively inert, however, on speaking with several dental professionals, I have heard that there is a rather large failure rate with zirconia (25%). It is also more expensive than titanium and requires an oral surgeon who knows how to use it.

For someone who is not in the best of health, particularly if you have diabetes, gum disease or other chronic diseases, implants of any material may not work well. Being a smoker will also affect your ability to heal.

According to Hal Huggins, (considered the father of holistic dentistry) there is an interaction between metal and the microbiota in the mouth. The metals tend to favor pathogenic bacteria which can give off  “atypical toxins”. (source) This can stress the immune system. If you are getting the implant to replace a root canal tooth, this may not be the best choice, especially if you have any health issues.

Find out more about issues with root canal teeth here.

Additionally, there is the issue of jaw bone density. You must have enough bone density in the area of the implant. If you do not, then another procedure of bone grafting will be necessary. The options here are also rather daunting as the choices are either to use:

All that being said, there is something to be said for a procedure that may be just fine for most people, which permanently replaces a pulled tooth.

This is a procedure that requires preparing the teeth around the pulled tooth. What this really means is that the teeth surrounding the pulled tooth are shaved down and will need to have a crown. Therefore, you are sacrificing two healthy teeth to replace one.

Additionally, if either of the two anchor teeth become compromised (and they already are when they are shaved down), you can potentially lose the original replacement tooth and the anchor tooth.

Furthermore, you are now asking two teeth to take on the chewing pressures of three teeth. When the two anchor teeth are already compromised, this may be an issue. Also, the replacement tooth is not attached to the gum or jaw bone and does not exercise the bone. When a bone is not exercised as it should be, the density diminishes.

The benefits of a Bridge

It will look and feel like a natural tooth and because it is fixed, you do not have to remove it for cleaning. It will also cost less than implants.

The Downside of a Bridge

As I mentioned above, you are sacrificing two healthy teeth to replace one. In my mind this is not a good option. There is also the issue of being able to clean properly under the crown that covers the pulled tooth (called the pontic).

This is an appliance that has replacement teeth fixed to a plastic base. The base matches the color of your gums and it may also be mounted on metal. There is also a clasp that attaches to your natural teeth. These should be removed at night and cleaned. It may take some time to get used to how they feel in your mouth. There may also be issues with aging – the fit may change and over time a tooth may crack or chip.

They are usually less costly than other options and may be easier to repair.

Clearly it involves more maintenance and thought than other options. There are also problems with how they fit and if anything changes in your mouth they may not fit anymore.

Here again, there will be metal as well as plastic in your mouth.

It may also be difficult to find a dentist who still does partial dentures at this point. Additionally, you would want someone who is  experienced and good at doing them.

Thanks to the folks at Orawellness for information on this option. A composite bridge is made of the same composite material that dentists use to fill teeth.

The Benefits of Composite Bridge

In building a composite bridge, the two adjoining teeth do not have to be ground down. This is a large benefit because if one of the anchoring teeth have an issue, you won’t lose all three teeth.

There are also no metals/microbiota issues here although the composite material may pose a problem for some.

The Downside of a Composite Bridge

The downside of a composite bridge is that again you are setting up two teeth to do the work of three and the problems with cleaning under the composite tooth.

It has also been said that composite bridges are not able to last as long as other options because the material itself is just not as strong.

As of this writing I have not fully decided what to do. I am leaning towards an implant because it will preserve the jaw bone and I do not want to deal with removable dentures.

Now you can read about what I did and how I feel about it in this post, My Dental Implant Update

Have you been faced with similar dental problems? How have you dealt with them? Leave a comment and share your experience!

Find out how I prevented my child’s wisdom teeth from extraction.