Why I Never Eat Commercial Bread

If you want to know why I never eat commercial bread,  it’s because of the additives, preservatives, dough conditioners and other toxic ingredients.

Even when I was still eating bread, I would roam the bread aisle of the super market looking for a loaf of whole grain bread that did not have these harmful ingredients. I knew that most/all commercial bread contains harmful additives.

People shake their heads and say,

Why I Never Eat Commercial Bread

Even then, I certainly knew that all the chemicals used in commercial baking were unhealthy for us.

Now, with all the traditional wisdom I’ve learned from the Weston Price Foundation, I know that grains can be really toxic when they are not properly prepared by soaking, sprouting and/or sourdough leavening.

Now, if I ate bread on a regular basis I would NEVER buy commercially produced bread.

I’ll tell you why.

Commercial Bread has No Nutrition

Up until the 1950s, bread had been made using sourdough leavening as the main technique, which would take up to a day to produce. This amount of time was necessary for the proper conditioning of the dough.

With the advent of  bakery manufacturing facilities and mass-production of square (condensed) loaves of bread, the production time for bread had to be accelerated.

It was discovered that the addition of certain chemicals and enzymes to the bread could shorten the process to two hours instead of the usual 12 to 24 hours.

Commercial bread manufacturers have no interest in nutrition.

If they are using refined white flour it is fortified with synthetic vitamins which are poorly absorbed. If they are using whole grains, the vitamins and minerals are all bound up in the bran where it is unavailable unless it has been properly prepared.

The marketing for these products is geared towards sale of the product, not the nutrient content.

That said, here is the ingredient label for a loaf of commercial bread that is trying to be “healthy”: 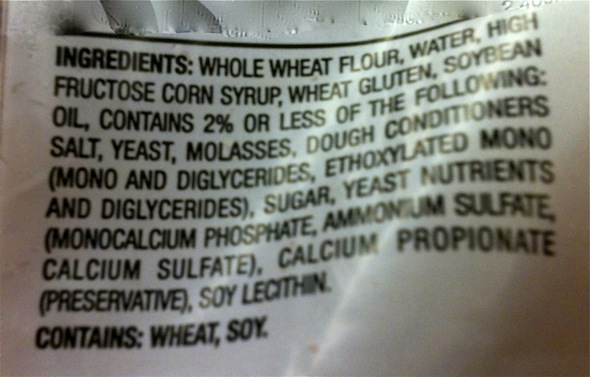 Commercial Bread is Full of Additives

Mono & Di-glycerides are considered softeners because they prevent the starch complexes from firming or going stale.

SSL and DATEM are dough strengtheners. These two chemicals interact with the proteins and prevent them from collapsing when other ingredients are added to the dough such as raisins, bran or nuts.

Lecithin aids in the emulsification of the fats in the bread which, in turn, makes a more consistent crumb. It also helps the bread remains softer by retaining more moisture and is a great binding agent. Of course, lecithin is derived from soy, so it is from genetically modified plants.

Azodicarbonamide is used in the food industry as a food additive, a flour bleaching agent and improving agent. Azodicarbonamide actually relaxes the dough so that when it is divided in large-scale bakeries under pressure, it still retains a good character.

It has been known to cause allergic reactions in those sensitive to other azo compounds, such as food dyes. The consumption of azodicarbonamide may also heighten an allergic reaction to other ingredients in a food.

The principal use of azodicarbonamide is in the production of foamed plastics as an additive.

In the UK, the Health and Safety Executive has identified azodicarbonamide as a respiratory sensitizer (a possible cause of asthma) and has determined that these products should be labeled with the words “may cause sensitization by inhalation.” Do you really want to eat this?

It should be mentioned that ascorbic acid is also used as a dough conditioner to strengthen the gluten, but because it tightens the dough, it has a limited use, and is rarely used commercially.

Bromide is a dough conditioner found in most flours as potassium bromate. It replaced potassium iodate starting in the 1960’s because bakers claim it yields dependable results, and it makes the dough more elastic, which can stand up to bread hooks and other commercial baking tools.

Bromate is an endocrine disruptor that competes for the same receptors in the thyroid gland as iodine. Constant ingestion of bromate in your daily bread may eventually create a thyroid hormone imbalance because iodine is needed for thyroid hormone production. It is also implicated in many cancers.

In 1999, the Center for Science in the Public Interest petitioned the FDA to prohibit the use of potassium bromate, charging that the FDA had known for years that bromate causes cancer in lab animals. It is still in use today, although some artisan bakeries will use unbromated flour.

Calcium propionate is probably the most common preservative in commercial breads. The propionic acid inhibits the growth of molds and other microorganisms. However, there has been some speculation that calcium propionate may induce autistic type actions in rats.

The two main reasons for the use of bread improvers are: to help produce gas, and to retain the gas inside the bread.

Sourdough fermentation over a 24 hour period naturally produces these enzymes – they do not need to be added.

Bread improvers aim to boost the amount of these enzymes artificially, thereby increasing the amount of fermentation early on in the bread production. This eliminates the need for a long fermentation and helps companies produce more in less time.

Ammonium sulfate, ammonium chloride and phosphates are used to provide nitrogen and/or food for the yeast. Monocalcium phosphate or calcium carbonate are used to compensate for soft water, which may yield soft, sticky dough.

As you can see from the ingredient label, even a loaf of whole wheat bread has all kinds of additives: dough conditioners, artificial food for the yeast, and preservatives. In addition, it has soybean oil that is most likely genetically modified as most of the soybean crop in the U.S. is GM.

Importantly, with very few exceptions, food companies do not soak, sprout or sour the grains. Therefore the grains in all of these products are not properly prepared and are full of anti-nutrients. So even if it is whole grain – the nutrients are not available as they are bound up.

Don’t even bother reading bread labels – with very few exceptions, they all have some additives you would not need to use at home.

Learn how to make your own bread and you will know that it is done correctly and with the very best ingredients.

Better yet, go grain free and enjoy the benefits to your gut, brain and joints!

Where to buy sprouted flour

The key to good health is a healthy microbiome. You may be shocked (or surprised) to find out that there are 10 times that amount of bacterial DNA in each and every one of us.

That makes us more microbe than human. Perhaps we are just walking containers for the bacteria – many of whom are essential to human life.

If you just can’t tolerate grains of any kind you may want to check out my online class: Go Grain Free!