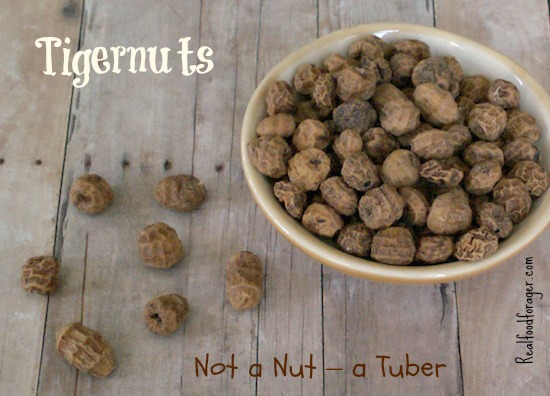 Suddenly tigernuts are all over the internet. If you have a nut allergy, rejoice! Tigernuts are a new/old food and they are not nuts at all!

These crunchy, snacky morsels are actually little tubers that have been a traditional food in Africa and the Mediterranean for eons! A true Paleo food!

Tigernuts are a New/Old Food

When I recently heard about tigernuts I was reminded of a snack bar I used to get years ago, in the health food store called tigermilk. I just googled it and came up with a bar made with peanuts (read why I stopped eating peanuts), high fructose corn syrup and natural flavors, trying to pass as healthy! Ha!

The tigernuts I am talking about, the authentic ones, are also known as, chufa, nut grass, or yellow nutsedge. First of all, they are not nuts, so folks with nut allergies or those who find nuts difficult to digest (even if they are properly prepared nuts) may really like this ancient food.

There is no doubt that tigernuts are an ancient food. They were documented in Egyptian art and according to this study recently published, our pre-human ancestors (Paranthropus boisei and Australopithecus bahrelghazali) fed upon grasses and sedges. Tiger nuts were foraged for sure.

As a member of the nutsedge family, tigernuts have been used in traditional medicinal treatments for digestive issues, menstrual problems, high blood pressure and probably many others (see the amazing story of the founders of Organic Gemini).

Tigernuts have an interesting taste – sort of like chestnuts with the texture of hazelnuts and are surprisingly sweet! They can be hard, so soaking for a while in water is a good idea to soften them.

A fantastic traditional milk made from the tigernuts is called Horchata de Chufa in Spain and Kunnu Aya in Nigeria. Thanks to Organic Gemini, this milk, in several delicious flavors may be purchased in select Whole Foods Markets and at their Brooklyn NY location, the Gansevoort Market. (See below for more ways to buy). I love this because I am a Brooklyn-born girl myself.

They also make tigernut flour and sell bags of the tigernuts. There is also the tigernut oil which I found to be very tasty. The oil has a fatty acid profile very similar to olive oil.

The Horchata de Chufa is made without any additives which is fantastic for folks that are very particular about that (myself included). The taste of the unflavored is rich, creamy and completely satisfying. Since the fatty acid profile of tigernuts is so good, tigernut milk is much healthier than nut milks, which tend to be high in omega 6 fatty acids – pro-inflammatory fatty acids.

Tigernuts are High in Oleic Acid

I placed my bottle of tigernut oil in the refrigerator and sure enough, it gelled up just like olive oil does – due to the monounsaturated fatty acids.

While tigernut oil appears to have a higher smoke point, just to be on the safe side, I wouldn’t use it for very high heat situations.

Tigernuts are also high in minerals such as magnesium and calcium. They have as much iron as red meat and spinach. The potassium levels are as high as coconut water. They also contain phosphorus, as well as vitamins C and E.

These babies are loaded with vitamins and minerals!

Tigernuts are High in Resistant Starch

Tigernuts are also high in resistant starch, which is a type of fiber that is relished by the beneficial bacteria in the gut. Resistant starch does not get digested at all by humans thereby becoming food for the microbiome.

You can get lots of information about resistant starch here. (Follow the links as well).

Anyone who wants to nurture their healthy microbiome needs to feed it with fiber ( and according to some, resistant starch).

Interestingly, in this study published in Science in 2013 scientists have revealed a mechanism by which harmful bacteria grow, crowd out beneficial bacteria and damage the gut, in conditions of Inflammatory Bowel Disease (IBD).

The important takeaway from this study is that the pathogenic bacteria survive by feeding on the byproducts of inflammation (becoming a vicious cycle), yet the good bacteria survive on fermentation of fiber.

This suggests that you should eat fiber (resistant starch) to feed the good bacteria. I would imagine that it is possible, after months or a year or two on the SCD/GAPS, or low carb diets, to transition to a more fiber rich diet in order to nourish the good bacteria.

Many foods on the SCD, GAPS and Paleo diets are great sources of both soluble and insoluble fiber, such as yams and sweet potatoes, green leafy vegetables, carrots and other root vegetables, fruits with an edible peel (like apples and pears), berries, seeds, and nuts.

There are many low carb and Paleo eaters that make a point of using some form of resistant starch in order to feed their microbiome.

Interestingly, this study in 2011 evaulated tigernuts for the resistant fiber content for use as a binder in pharmaceuticals. They found the tigernuts to have more resistant starch than potato. If you are taking a medication, the tablet may be bound with tigernut fiber at this point!

One note of caution. If you are just trying tigernuts, start with very little (like just a few). I find them very hard and would not eat them without soaking them for at least 12 – 24 hours. Some say to soak them 48 hours.

I have not tried the flour yet, but would use it with other flours as a source of resistant starch as opposed to making something entirely with tigernut flour. Here’s a nice recipe for tigernut flour pancakes from Empowered Sustenance.

My favorite way to incorporate tigernuts into my diet is by drinking the delicious Horchata de Chufa or mixing it into a shake. You can make this at home by soaking the tigernuts, adding water, blending and straining. Some add natural sweetener, but frankly, the nuts are already sweet so I would taste it before adding any. Here’s a nice recipe for Horchata from Nourished Kitchen.

More About the Tigernut Plant

Know as Cyperus esculentus (cyperus rotundus is another variety), it is found in the US and may be a nuisance to people who are particular about their lawns. According to Deane Green at Eat the Weeds, an accomplished forager (not a fake forager like myself lol),

Cyperus esculentus, the yellow nut sedge, is native to warmer parts of the Northern Hemisphere. It has been in use since ancient Egyptian times and is cultivated around the Mediterranean. The roots reach the size of hazelnuts and have a similar taste. They are excellent raw right out of the ground, boiled or roasted. Its tops are yellowish.

Cyperus esculentus, the yellow nut sedge, is listed as a noxious weed in many places and difficult to control. It can produce hundreds of thousands of seeds per plant per season. Researchers say a single nutsedge can produce 1900 plants and 7000 tubers in a year.

Wow! we really should be incorporating this interesting tuber into our food supply.

Where to Find Tigernuts