Tell Your Gastroenterologist That Diet DOES Work for IBD – New Study With Paleo AIP!! 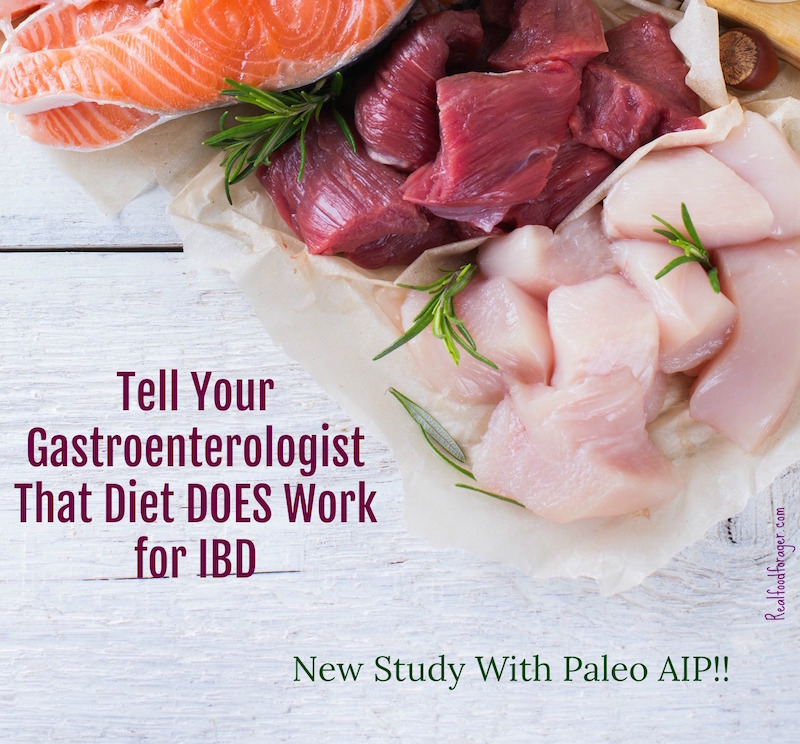 Gastroenterologists have been telling their Inflammatory Bowel Disease (IBD) patients for years that diet has no effect on the disease. Now we have a study using the Paleo AIP protocol that proves otherwise!

It sickens and angers me when I hear patients tell me that their gastroenterologist insists that diet has no effect on their Crohn’s or ulcerative colitis. Especially when it comes to children suffering from the disease.

That is just not so.

Functional and alternative practitioners have known for years that diet is critically important in managing the disease.

What is Inflammatory Bowel Disease?

Inflammatory Bowel Disease is an umbrella term for autoimmune diseases of the intestine. These include:

All have various levels of symptom severity and different histological pathologies.

However, they are all autoimmune and they are all inflammatory. While most of the symptoms are centered in the digestive tract, there can be symptoms in other, distant parts of the body.

For instance, many people with celiac do not even have intestinal symptoms, but may have skin issues, joint pain, brain fog, etc.

People with Crohn’s may also have joint pain and those with ulcerative colitis may have eye problems and joint pain.

The conventional medical approach totally discounts diet as an avenue of treatment. With the exception of celiac disease, typical treatment for IBD is centered on various levels of stronger and stronger medications. When medication fails, surgery is the next step. This usually involves removal of parts of the intestine. With ulcerative colitis it could mean a colostomy bag for the rest of a patient’s life.

Clearly, it is imperative to carefully manage the disease.

As a note, celiac disease, is probably one of the only diseases that conventional medicine does, in fact, support the use of diet – the gluten-free diet – as the first line of treatment.

Therefore, most discussions about whether or not diet can affect IBD, pertain to Crohn’s and UC.

Diet is Critically Important in Managing Crohn’s and Ulcerative Colitis

One of the first diets to address IBD was the Specific Carbohydrate Diet (SCD). This diet was originated by Dr. Haas as a therapy for celiac disease before gluten was identified as the first offending agent.

Elaine Gottshall, wrote her book, Breaking the Vicious Cycle, published in 1996, after saving her own daughter from colon removal due to severe ulcerative colitis. The diet successfully put her daughter into remission.

From the SCD, evolved the Gut and Psychology Syndrome (GAPS) diet. Created by Dr. Natasha Campbell-McBride, this diet successfully treated her own son with autism. GAPS takes the SCD to another level of food quality – many of the principles are based on Weston A Price Foundation guidelines – excluding grains and dairy (until tolerated).

Many folks with IBD are following the Paleo diet – a diet which eliminates grain, dairy, legumes, additives and refined sugars – just like the preceding diets – but allows starches such as sweet potatoes and other tubers.

The Paleo Autoimmune Protocol (AIP) is also followed by folks with a variety of autoimmune diseases. This diet is a difficult elimination diet, but has had major successes with people who are looking for a natural approach to their illness.

The patients were on the diet for a mere 6 weeks, followed by another 5 weeks on the maintenance phase of the diet.

Patients were assessed at baseline, week 6 and week 11, by various clinical indices, lab tests and biomarkers. Additionally, endoscopy was performed at the end of the study.

After 6 weeks of the initial elimination diet, patients improved symptomatically,

… the fecal calprotectin marker for inflammation in the stool,

The study authors concluded that,

In light of the extremely short period of time studied, this is a major breakthrough for patients!

The AIP had a powerful effect on improvements for these patients.

Major improvements were noted using disease activity indices from the patients, in fecal calproctin – a great marker of inflammation in the intestine and on endoscopy – a measure of the actual inflammatory cells and tissue destruction going on in the intestine.

The autoimmune protocol is a great diet for IBD. However, for some it is easier to start with the SCD or GAPS diet and slowly transition over the AIP.

Either way, you can now show your gastroenterologists that their peers are taking diet seriously.

This is a major leap forward!

You can check out the book, The Autoimmune Wellness Handbook, by Mickey Trescott and Angie Alt here.

Note: Many people with IBD manage the disease with diet and still need to take some medications. Never stop taking medications without guidance from your prescribing physician. Any changes to your diet and/or disease management should be discussed with your appropriate health care provider. See my full disclaimer here.