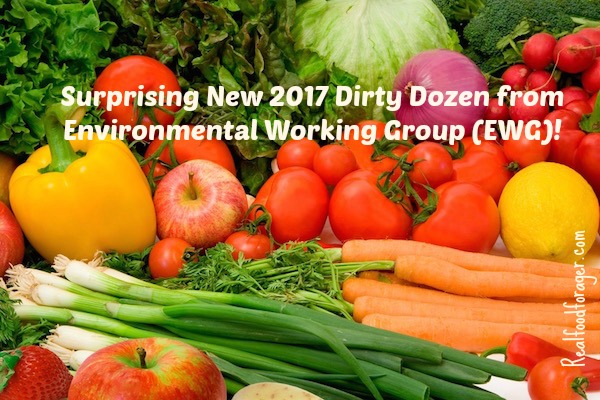 Each year the Environmental Working Group (EWG) analyzes pesticide residue testing data from the U.S. Department of Agriculture and Food and Drug Administration to come up with their rankings.

This list should be your go-to list while shopping – or commit it to memory so you can buy organic items that are high on the list and save money on items that are safer to eat from conventional growers.

The new data from the FDA and the USDA shows that conventionally grown spinach has more pesticide residues by weight than all other produce tested. They also found that three-fourths of samples tested were contaminated with a neurotoxic bug killer that is banned from use on food crops in Europe.

This is a significant jump from last year, when spinach ranked number 8 on the list. The testing has found,

an average of almost seven pesticides on every conventionally grown spinach sample collected in 2015 – with a maximum of 16 different pesticides or breakdown products on a single sample. Four pesticides – one insecticide and three fungicides – were responsible for the bulk of the residues detected on spinach. (source)

Additionally, seventy-five percent of the samples contained residues of permethrin, a neurotoxic insecticide. At high doses, permethrin can overwhelm the nervous system and causes tremors and seizures. This is especially true in children. This study published in Environmental Health in 2015,

The Environmental Protection Agency is currently assessing the health risks of permethrin and related pesticides on food, with its final report due later this year.

Don’t hold your breath for that report, though, with the current administration’s slash and freeze policy for the EPA.

Europe has not permitted any permethrin to be used on food crops since 2000.

Three other previously undetected fungicides – mandipropam, fluopicolide and ametoctradin, which are used to kill mold and mildew – were found at relatively high concentrations on spinach samples.

DDT, a pesticide long banned in the U.S., also showed up on spinach and very few other crops. Residues of DDT and its breakdown products were found on half of spinach samples.

Strawberries are Still Number 1 on the Dirty Dozen List

Chloropicrin, the active ingredient in tear gas is used on conventional strawberries.

According to the EWG,

… some [nerve gases are] developed for chemical warfare but now banned by the Geneva Conventions. (source)

Is it that really necessary to use chemical warfare to grow strawberries?

Of course not! For just a little bit more money, organic growers have been successfully raising strawberries for years.

USDA tests found that strawberries are the fresh produce items most likely to be contaminated with pesticide residues,  even after they are picked, rinsed in the field and washed before eating. (source)

Fumigants the Most Dangerous

An older strawberry fumigant is methyl bromide that was banned by an international treaty in 1987 because it destroys the earth’s protective ozone layer. However, its use has continued for almost 40 years, with  “critical use exemptions” from the EPA, which will end this year.

Twenty years ago, EWG and other groups campaigned against methyl bromide in California’s Central Coast region – the area where strawberries are mainly grown. The campaign forced the state to establish protective buffer zones near the growing urban areas around the farms, such as, schools and neighborhoods and to restrict methyl bromide injection during school hours. These rules helped to reduced Californians’ exposure to methyl bromide but still allowed its use.

Now, twenty years later, methyl bromide use on strawberries is in decline. However, the new soil fumigants that are replacing it are also hazardous. These are, chloropicrin, the active ingredient in tear gas, and 1,3-dichloropropene, a carcinogen sold by Dow Chemical Company as Telone. Not surprisingly, both are banned in the European Union.

Fumigation by these toxic gases is performed by people in hazmat suits, covering the newly sprayed fields to keep the gas underground and away from people and animals. But these fumigant gases can leak during application and tarps can tear. The leaking fumes endanger farm workers and people who live nearby.

Would you like to live next door to a strawberry farm? I certainly wouldn’t.

The EWG is a non profit foundation that is primarily funded through individual donations and grants. You can see where they get their dollars from here. This allows them to research and in turn, help fund projects with other non-profit groups that are concerned about our toxic environment, such as, Organic Voices Action Fund (OVAF). This project seeks to emphasize the benefits of eating organic food and works towards the labeling of genetically modified foods.

I really love this organization. They offer the consumer several very helpful guides for a tiny donation which, in turn, helps support their work.

Check out the Dirty Dozen and the Clean Fifteen  (these are free) to help you make good choices when shopping for food. I use these lists all the time because I cannot always source organic produce. There are also some types of produce that do not really require you to buy organic. For instance, I usually buy conventional avocados, asparagus, cantaloupe and mangoes.

On the other hand, I always buy organic apples, strawberries, raspberries, grapes, peaches and now, with the new information for 2017, I will buy only organic pears. I am grateful to have these fruit and vegetable selections properly tested each year.

Buying organic supports organic farmers, many of whom are small family farms. Buying organic also is an investment in your health.

Get your copy of the Dirty Dozen and the Clean Fifteen here.

What do you do when it comes to produce? Leave a comment and let me know!

Autoimmunity and Your Total Body Burden of Toxicity