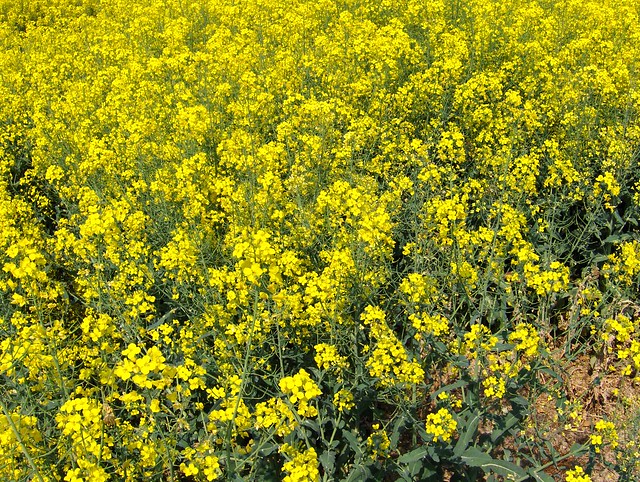 Across the state of North Dakota along many highways, GM canola plants (an engineered variety of the rapeseed plant) have been found. These “escaped” GM, herbicide resistant plants account for 45% of the samples. Worse then being found in the wild, they hybridize with each other to form new combinations of transgenic traits that can spread to wild plants.

This is exactly what opponents of genetic modification are afraid of: spread of laboratory created genes to the wild population. Similarly, wild salmon will be in extreme danger if they allow the genetically modified “Frankenfish” salmon to be breed. In the movie Jurassic Park, the laboratory-made dinosaurs were not supposed to reproduce. Yet, at the end of the movie we see the babies…

Here again, the study authors, researchers from North Dakota State University, the University of Arkansas, the U.S. EPA and California State University at Fresno, believe that genetic modification is good as it can help feed the world’s growing population. Feed the world with a highly refined, deodorized and rancid oil that is devoid of nutrition and adds to free radical damage?

Rapeseed oil was used hundreds of years ago in Asia and Europe as fuel for lanterns. Later on, especially during WW ll,  machinists used it to lubricate metal surfaces in engines as it resisted water better than other lubricants. After the war, need for rapeseed oil in steam engines declined so other markets were explored.

Rapeseed oil is high in erucic acid which has a distinctive taste and color and experiments showed a potential for heart damage. It was also not appealing to animals as foods as it has a sharp taste from the glucosinolates in it.

In 1998 a canola variety was developed which is genetically modified to be disease and drought resistant as well as herbicide tolerate. This accounts for 82% of the canola in Canada. This new variety of rapeseed is low acid and so offers many other uses. When the seed is crushed to produce the oil, the remaining rapeseed meal is tolerated by livestock and has become a “high quality” animal feed.

Canola oil has no saturated fat and so the FDA has has given it a qualified health claim based on the theory that the absence of saturated fat makes it a healthy food. Since the high levels of erucic acid in the wild rapeseed oil have been breed out, there are no concerns for the original toxicity associated with rapeseed in this food grade oil. It has GRAS status — generally recognized as safe.

So what are our concerns? Many. Aside from rapeseed being the highest producing oil-seed crop in the United States and thus is grown over many acres of land, it creates a poor quality, highly processed oil that leads to heart disease and accelerated aging, as do all refined oils.

Additionally, and the thing that actually worries me the most, the rapeseed blossom is a major source of nectar for honeybees. That means the honeybees are exposed to massive amounts of pesticides and herbicides used on these plants.

Perhaps this has something to do with the deadly Colony Collapse Disorder that is plaguing the honey bee population and will have far reaching consequences for agriculture in the years to come. Can this chaos we have created get any worse? Please leave a comment and let me know what you think!

The Establishment of genetically modified canola population in the US

Why Every Commercial Salad Dressing is a Health Hazard