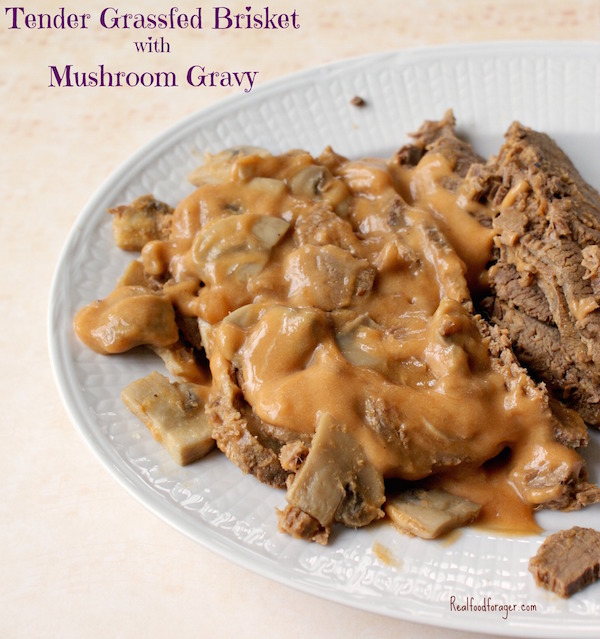 This is a recipe for a delicious, melt-in-your-mouth tender roast. This Tender Grassfed Brisket with Mushroom Gravy is a foundational dish!

I have come to the conclusion that of all the cuts of beef for a roast, I love brisket the most. There are many ways to make brisket, but having enough gravy is key.

Try to get a piece (or whole) brisket that still has the fat on it. That is key to making the gravy taste good.

The gravy is SCD/GAPS legal because there are no starches added to thicken it. It is not necessary to add flour to thicken a gravy at all. The onions and carrots add nutrition and thickness to any natural juice gravy and is much better than adding flour.

Made with Homemade Beef Broth

The use of homemade beef bone broth is also key to flavor and of course, it adds super nutrition in terms of minerals and collagen/gelatin peptides. Your guests will ask you how you get it so delicious without added flavors from a bouillon or can.

It’s all in the broth folks.

It’s all in the broth.

With this recipe, you should have plenty of gravy. If you want to add the mushroom gravy to the basic brisket gravy, here is a recipe for simple mushroom gravy that you can make on the side and freeze any extra in portion containers.

Recipe for the simple Mushroom Gravy