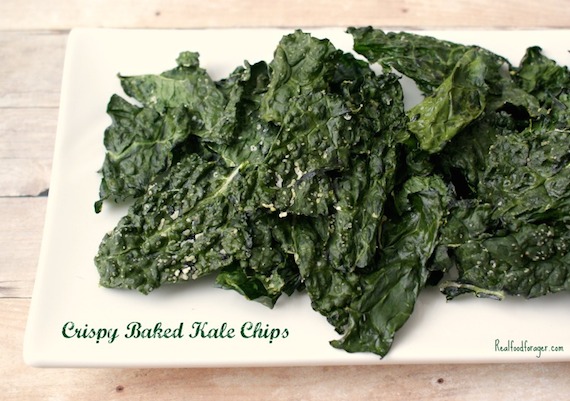 Since following a grain free diet, I haven’t made popcorn in years. The next best thing? Crispy baked kale chips – these went over well!

I finally joined the 21st century and bought a new TV (it’s been over 15 years). To celebrate after setting it up and admiring how modern it looks, I wanted something to crunch on while watching.

I used the lacinato kale since I happened to have a bunch in the refrigerator, but you can use any variety of kale for these chips. The trick is to start out with dry leaves, so after you wash the leaves – and I recommend that you do this thoroughly as soil can remain in the many crevices – you need to set them out to dry before baking.

Kale is one of those vegetables that people love to call a superfood. Well, perhaps it is. It’s particularly loaded with vitamin A, vitamin K1, beta carotene, lutein, zeaxanthin and folate. It also contains a lot of minerals such as calcium, magnesium, potassium, phosphorus and manganese. Additionally, it has a great omega 3 to 6 ratio. (source)

Kale is in the brassica family and is full of sulfur, a compound that is critical for numerous metabolic processes in the body. Sulfur also happens to be one of the most abundant minerals in the body. You wouldn’t know it because it is not listed on food labels, but it is very important.

Sulfur plays a role in creating glutathione, an important molecules of detoxification. Glutathione is perhaps the most powerful anti-oxidant in the body. It neutralizes free radicals, assists the liver in detoxification and plays a part in DNA synthesis.

Glutathione is made in the body, however people with chronic illnesses tend to have a deficiency of glutathione for a variety of reasons. Making sure you have enough of the building blocks of glutathione on hand is crucial for healing.

While sulfur is available in foods like beef, chicken, eggs, pork and dairy, getting it from sulfur-rich vegetables is also important. The animal sources of sulfur contain the sulfur-rich amino acids – critical in protein synthesis, structure, and function.

The sulfur-rich vegetables contain the powerful organosulfur compounds which are also important. According to this study

Organosulfur compounds modulate the activity of several metabolizing enzymes that activate (cytochrome P450s) or detoxify (glutathione S-transferases) carcinogens and inhibit the formation of DNA adducts in several target tissues. Antiproliferative activity has been described in several tumor cell lines, which is possibly mediated by induction of apoptosis and alterations of the cell cycle. Allium vegetables and organosulfur compounds are thus possible cancer-preventive agents.

Sulfur-rich vegetables are in the brassica family as well as the allium family.

Dr. Terry Wahls, in her fascinating TED talk, and her book The Wahls Protocol, cured her progressive MS disease with diet. The core of her diet is 9 cups of vegetables a day – 3 cups of sulfur-rich, 3 cups of leafy greens and 3 cups of colored vegetables a day along with a Paleo diet.

Get the Wahls Protocol here.

Eat your vegetables along with a Paleo, real food diet.