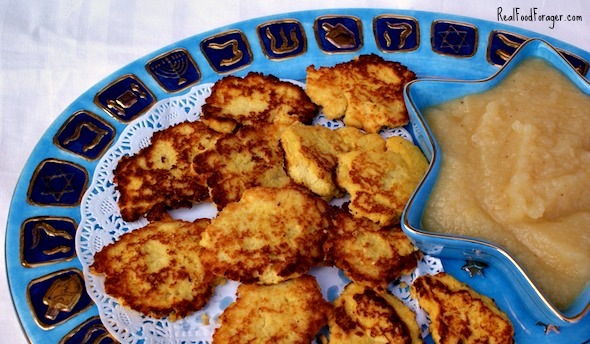 Hanukkah would not be as festive if not for latkes. If you are on SCD or GAPS you cannot eat potatoes. These Celeriac Latkes with Onion and Fennel are amazing!

Also known as, The Festival of Lights, Hanukkah is a celebration of the re-dedication of the Second Temple. Judah Maccabee and the other Jews who took part in this event, witnessed what they believed to be a miracle.

Even though there was only enough untainted olive oil to keep the menorah’s candles burning for a single day, the flames continued flickering for eight nights, leaving them time to find a fresh supply. Hanukkah traditionally features foods cooked in oil for this reason.

Celery Root is a Great Substitute for Potato

If you are following a special diet like SCD, GAPS or Paleo, potatoes are off the menu. Using a root vegetable like celery root is a fine substitute. In fact, these latkes are so good, many people prefer them to plain potato pancakes.

Not only are these savory and satisfying, they are full of good nutrition and are low carb to boot. One half cup of raw celery root contains about 4 gms of carbs and 1 gm of fiber. It is also very low on the glycemic index. It contains some vitamin C, folate as well as calcium, magnesium, potassium, phosphorus and sodium.

Compare that to the nutrient data of white potato which shows that potatoes are a good source of only three nutrients: vitamin B6, potassium, and vitamin C. Potatoes are also high on the glycemic index and considered to be somewhat inflammatory. Clearly, celeriac offers a lot more nutrition.

Fennel adds even more nutrition. Fennel is high in vitamin C, fiber, folate and potassium. It is also a good anti-oxidant.

Interestingly, the volatile oil that gives it the distinctive flavor, anethole, has repeatedly been shown to reduce inflammation and to help prevent the occurrence of cancer. The anethole in fennel prevents activation of a potentially strong gene-altering and inflammation-triggering molecule called NF-kappaB. Anethole has also been shown to be able to protect the liver of experimental animals from toxic chemical injury.

In this recipe, the addition of the oil used for cooking will add flavor and important fat soluble vitamin and mineral activators. Finally, the onion supplies sulfur, vitamin C, folate, potassium and choline, adding even more nutrition to this dish. Read more about the importance of sulfur here.

All three of these ingredients are give powerful nutritional support

The celeriac, fennel and onion together, cooked in a beneficial oil like tallow, palm shortening, coconut oil or even olive oil, are a great combination and a super healthy way to observe and celebrate with this traditional dish.

Celeriac Latkes with Onion and Fennel

Latkes made with celery root, fennel and onion