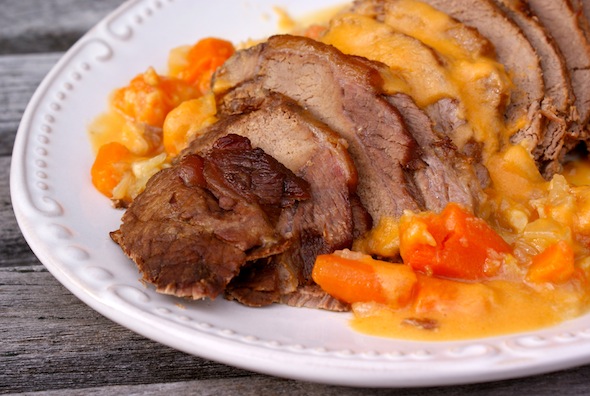 It’s easy to make Braised Paleo Pot Roast appropriate for SCD, GAPS. Leave out the starchy tubers like potatoes and don’t thicken the gravy with flour.

Pot roast is a major comfort food. According to the Encyclopedia of American Food and Drink, the term pot roast first appeared in print in 1881. Back then it was described as meat that is browned and cooked with vegetables and gravy in a deep pot or saucepan that is covered.

It really has not changed much at all.

Pot roast is a braised beef dish. I never knew what braising was until I looked it up a few years ago. It means that the cooking relies on heat, time, and moisture to break down the tough connective collagen tissues in meat.

Simply put, it means cooked in water or some other liquid. This makes braising an ideal way to cook those tougher (cheaper and better for you because they have the collagen tissue in them) cuts.

Pot roast is typically made by gently browning a roast-sized piece of beef, then slow-cooking in liquid in a covered dish.

What Cuts of Meat are Used for Pot Roast?

Tougher cuts such as boneless chuck roast, bottom round and rump roast are good cuts of beef for this cooking technique. These cuts are tough and fibrous, but they become tender and flavorful after slow braising. The chuck roast comes from just above the shoulder and the rump roast comes from — well you get a sense of where that comes from. The only difference is the location of the fat — in the chuck it is marbled through the meat, the rump has it lying on top.

As with all braises, slow cooking tenderizes the meat and the liquid (water, stock or even a splash of wine) melds its flavor with that of the beef, resulting in falling-off-the-fork-meat that is dripping with tenderness.

If you are using grassfed beef, the best way to cook it is slow and low — for a long time on a low temperature.

Pot roast is often served with carrots and potatoes as well as other vegetables such as onions simmered in the cooking liquid. It’s a very simple fix to keep out the starchy vegetables and make the gravy without flour.

I used to make it in the crockpot, but discovered I love it more when it is cooked low and slow in my dutch oven.

Instructions for the roast

Instructions for the gravy