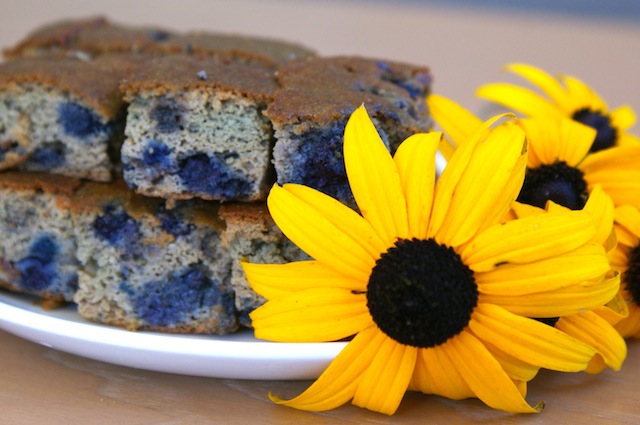 Blueberries are everywhere now! Here is a recipe for a grain-free, gluten-free, sugar-free treat that has an interesting consistency, balance and taste. Blueberries add flavor, texture and an abundance of antioxidants to any baked product.

Antioxidants are a category of vitamins, minerals and enzymes that help bind up harmful metabolic by-products called “free radicals” that can lead to tissue and DNA damage, cancer, heart disease, diabetes and other age-related diseases.

Free radicals are highly reactive compounds that are formed from normal metabolic functions in the body. Free radicals are also generated  when our cells are exposed to a variety of substances such as radiation, chemicals, pollution, smoke, drugs, alcohol, pesticides and the sun. A poor diet also contributes to the formation of free radicals. Anthocyanin (the pigment that makes blueberries blue) contains naturally occurring plant chemicals called polyphenols which have very high antioxidant characteristics. The darker, deeper blue fruits have the highest anthocyanin values, thereby supplying the most potent antioxidant sources.

The USDA Human Nutrition Research Center on Aging in Boston has developed an assay called ORAC (oxygen radical absorbance capacity), which rates the antioxidant capacity of foods. Fresh blueberries have a high level of ORAC, at 2400 per 100 grams. Researchers have found that blueberries rank #1 in antioxidant activity when compared to 40 common fresh fruits and vegetables.

Sunflower seeds are also full of nutrition. Be sure to soak them in a salty brine before eating in order to remove enzyme inhibitors that make them hard to digest. You may also dehydrate them before using in this recipe. I simply soaked them and used them right away. If you aren’t planning on using them right away they must be dried or mold will form.

While sunflower seeds are high in omega 6 fatty acids (which should not be too high in one’s diet), they also provide omega 3’s as well as protein and fiber, phosphorus, potassium and folate.