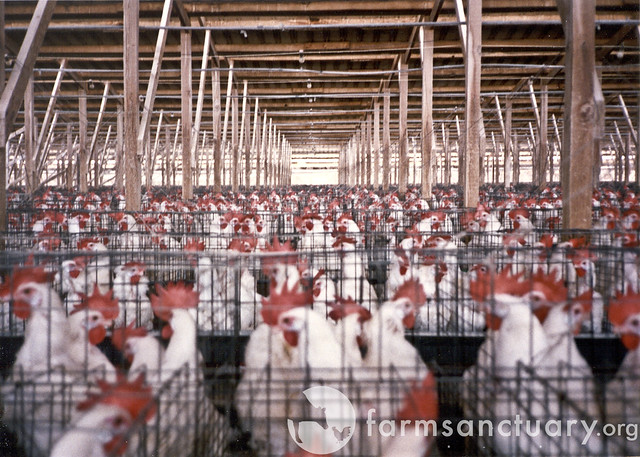 Would you like to live next door to one of these? Or anywhere nearby for that matter? What you see above is a Concentrated Animal Feeding Operation (CAFO) that may house hundreds to thousands of factory farmed animals in confinement buildings. It epitomizes the corporate takeover of chickens, turkeys, ducks, cows, calves, pigs, etc. It is the embodiment of cruelty to animals.

Inside, there is no sunlight to warm their skin (and generate vitamin D), no fresh air to breath, no room to move about, no grass to forage, no mud to roll around in if the urge should hit. In these concentration camps for animals there is no opportunity to live a natural life.  Old McDonald would be screaming “O O O O NO” if he could see what has happened to mainstream farming today.

Aside from the ethical considerations, these CAFOs are MAJOR polluters of the air and water in the surrounding communities. These factories generate 500 million tons of manure annually. However, this does not get treated the way sewage does; this liquefied excrement is stored in large dirt cesspools called lagoons (oh the irony!). The solid waste is stored in piles called “litter.” This litter is then spread on surrounding cropland. Knowing this, why did it take so long for government officials to figure out what caused the dangerous pathogens in the spinach crop two years ago? It was waste runoff from these factory farms plain and simple. Heavy rains may wash this waste into our waterways resulting in dangerous bacterial contamination, massive fish kills and crop contamination. Additionally, the air may contain poisonous gases such as hydrogen sulfide and the odor is so strong it may sicken neighbors miles away.

In the factory farming industry, the system is designed to maximize production with minimal costs and without regard for public health, animal health, the environment, food safety, neighboring economies,  or the surrounding communities. However, according to a report by the Union of Concerned Scientists, corporate owned factory farms are actually quite an expense for society at large. They threaten food safety and are responsible for massive and frequent food recalls. Up to 70 percent of all antibiotics sold in the U.S. are used by factory farms to keep the animals alive in their filthy cramped quarters, contributing to a rising emergence of antibiotic-resistant bacteria. This is a threat to human health. Furthermore, these factory farms drive down the property values of adjacent homes and farmland by as much as 70 percent in some rural counties.

According to the Sierra Club Newsletter, the independent Pew Commission on Industrial Farm Animal Production conducted a comprehensive, fact-based, balanced two-and-a-half year study of the industrial farm animal production (IFAP) system. Commissioners reported that the factory farm system often poses unacceptable risks to public health, the environment and the welfare of the animals, and recommended that significant changes be implemented immediately. Additionally, the Sierra Club opposes all permits for new or expanded factory farms, and encourages consumers to find safe and sustainable sources for their meat, poultry, eggs and dairy products.

All across the country, legislatures are shielding CAFOs from transparency.  Recently at a heated meeting in Knox County, Missouri, residents voiced concerns over local concentrated animal feeding operations and whether or not the county’s health ordinance is being properly enforced. In Missouri, House Bill 209 and Senate Bill 187 would restrict compensation for damages caused by CAFOs. How will the neighbors like that? In Idaho, lawmakers are considering a move to shield data related to CAFOs from the public. In Iowa, lawmakers are considering a bill that would make it illegal for activists to film farm operations while undercover. A Florida bill was introduced that would make photographing a farm a felony. (That bill has since been amended to target those who trespass on private land.) These bills all support the corporate farming structure and continue this sad state of affairs.

The SOLUTION to speak with your pocketbook. If enough people stop buying factory farmed animals and start to purchase milk, meat, poultry and eggs from a local farmer who treats the animals humanely, corporations will notice and things may start to change. There are many benefits in changing to a pasture-based model for both humans and animals. Polyface Farm in Virginia, run by Joel Salatin is a stellar example of using modern technology to promote the wisdom of tradition. Leave a comment below and let me know what your thoughts are on this topic.

Keep Your Laws Off My Cow!