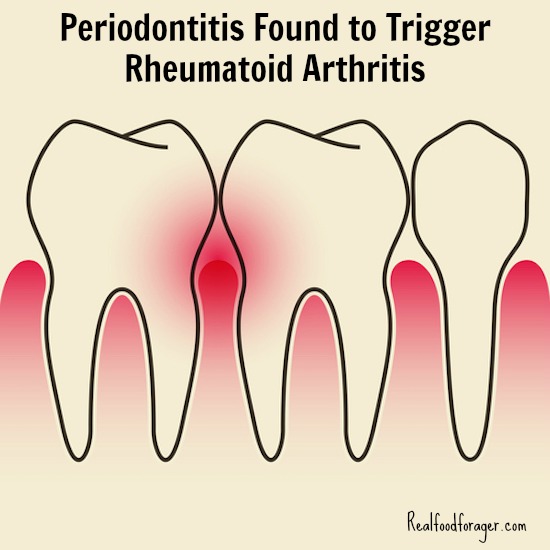 Researchers recently discovered that a bacteria commonly found in those with periodontitis may trigger the autoantigens and the resulting inflammatory cascade in the joints of people with rheumatoid arthritis (RA).

In a study published online in December 2016, in Science Translational Medicine, researchers (Konig et al.) discovered that a specific pathogen called Aggregatibacter actinomycetemcomitans (Aa) induces abnormal changes in neutrophil function which has been observed in the joints of people with RA.

The functional medicine approach focuses on the root causes of autoimmunity – involving the trifecta of genetic susceptibility, environmental triggers and  leaky gut syndrome. Yet, understanding a newly discovered trigger such as a bacterial infection, will lead to better prevention and treatment.

Leaky Gut is Implicated in All Autoimmune Diseases

In February 2012, Alessio Fasano, M.D., published his paper, Leaky gut and autoimmune diseases in the journal, Clinical Reviews in Allergy and Immunology. Dr. Fasano, had been researching this topic in relationship to celiac disease and gluten sensitivity. The review paper he wrote is focused on the role of impaired intestinal barrier function (leaky gut) on autoimmune pathogenesis. In short, he is getting to the real causes of autoimmunity.

Fasano’s theory explains how an autoimmune condition may develop.

As mentioned above, it involves a trifecta, or perfect storm of three conditions:

What this means is that people who have a leaky gut, as well as the genetics for an autoimmune disease, can develop autoimmunity when exposed to a trigger.

Acknowledging that auto-antibodies are present does not explain why they are there. Fasano’s theory does explain this. Furthermore, it suggests that if you can cure the leaky gut, you can cure the autoimmune disease.

Bacterial triggers of disease have always been a focus since the origin of Germ Theory. Due to the Hygiene Hypothesis and a more holisitic view of autoimmunity, we have been moving away from a Germ Theory model, but this new information can only add another avenue to treatment methods.

Recent studies have indicated that infections of the oral mucosa may lead to diseases such as heart disease, and now joint disease.

With technological advances which have enabled scientists to analyze the DNA of bacteria and the exploding research in the microbiome – it has become apparent that the oral microbiome plays a large part in health and disease.

Other studies have shown an association between bacterial P gingivalis–mediated citrullination and induction of anticitrullinated protein antibodies in rheumatoid arthritis. (Check out this fascinating review article here).

Much recent research has indicated that periodontal disease appears to be commonly associated with individuals who have RA and may be the trigger for this autoimmunity in susceptible people.

According to the researchers,

Periodontitis was characterized by the presence of citrullinated autoantigens that are primary immune targets in RA. The citrullinome in periodontitis mirrored patterns of hypercitrullination observed in the rheumatoid joint, implicating this mucosal site in RA pathogenesis… We identified the pore-forming toxin leukotoxin A (LtxA) as the molecular mechanism by which Aa triggers dysregulated activation of citrullinating enzymes in neutrophils… Exposure to leukotoxic Aa strains was confirmed in patients with RA and was associated with both anticitrullinated protein antibodies and rheumatoid factor… These studies identify the periodontal pathogen Aa as a candidate bacterial trigger of autoimmunity in RA. (source)

If you read the above quote, you can see that the mechanism for the autoimmune response is quite complicated. In RA, citrullination (as described above) can become excessive and mediates damage to the joint tissues.

Anticitrullinated protein antibodies are a hallmark of RA, and may be measured and present early in the disease process. These antibodies are associated with erosive joint destruction and greater disease activity, and positivity at the time of diagnosis is a predictor of more aggressive disease.

Rheumatologists can actually measure these antibodies and according to this study, it is more predictive and accurate than the conventional use of RA Factor.

One can’t have a discussion about the relationship of the oral cavity to health without mentioning Dr. Weston Price. Perhaps it was his original research in the 1930’s ans 1940’s that started this interest.

Dr. Price took the root canal teeth of patients sick with RA, heart disease and other ailments and implanted them under the skin of rabbits. He found that the rabbits contracted the very same disease of the person to whom the tooth belonged. He became convinced that root canal teeth was diseased and recommended that root canals procedures be stopped.

Dr. Hal Huggins has written about this in great detail.

The root canal tooth can never be sterilized due to the miles of microtubules that exist in a tooth.

Tooth decay and the need for a root canal comes from bacteria in the oral mucosa – perhaps the very same pathogens that have been identified above.

How To Improve Your Teeth, Gums and Health

You can prevent tooth decay, tooth loss and gum disease. You can start by following the recommendations found in this article about starting a real food journey.

Check out my book Heal Your Microbiome Optimize Your Health for the real causes of disease.

Join my newsletter and receive 2 free gifts to aid you on your healing journey!

Other autoimmune diseases have been linked to pathogenic bacteria such as; multiple sclerosis with Epstein-Barr virus (EBV) and measles virus, Type 1 diabetes with coxsackievirus B4, cytomegalovirus (CMV), mumps virus, and rubella virus and Guillain-Barré syndrome with EBV, CMV and Campylobacter bacteria.

All of this adds to our knowledge of the possible causes and triggers of autoimmunity!