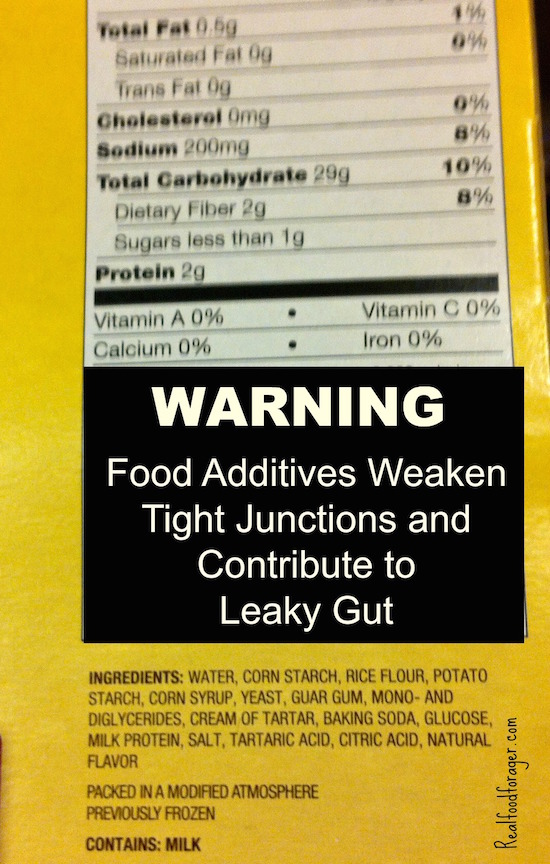 Researchers have established the connection between the consumption of processed food and autoimmune disease.

In a study published in the journal Autoimmunity Reviews, researchers have identified more processed foods associated with autoimmune disease.

Since Dr. Fasano identified the three factors needed in the perfect storm of autoimmunity, leaky gut has become a household word.

Fasano described the three factors as:

In February 2012 in the journal, Clinical Reviews in Allergy and Immunology  a paper called Leaky gut and autoimmune diseases was published. The author, Alessio Fasano, M.D., had been researching this topic in relationship to celiac disease and gluten sensitivity. The review paper he wrote was focused on the role of impaired intestinal barrier function (leaky gut) on autoimmune pathogenesis. In short, he was trying to get to the real causes of autoimmunity.

Fasano’s new theory explained how an autoimmune condition may develop. It involves a perfect storm of three conditions as outlined above.

What this means is that people who have a leaky gut, as well as the genetics for celiac disease (as an example), can develop autoimmunity when they eat gluten (the trigger). This will cause further intestinal damage.  The increased intestinal permeability (leaky gut), allows the environmental trigger (gluten) to access the body and this triggers the genetic predisposition.

Now we have another study that confirms this connection. In this study entitled, “Changes in intestinal tight junction permeability associated with industrial food additives explain the rising incidence of autoimmune disease,” the researchers established 7 food additives that are increasing in the worldwide food supply as developing countries adapt a Western diet.

Infectious disease is decreasing, but chronic degenerative illness is increasing. In the words of the top immunologist in the world, Dr. Yehuda Shoenfeld, in his book Infection and Autoimmunity,

Until proven otherwise, all chronic illness is autoimmune.

The incidence of allergies, asthma and autoimmunity is increasing at an alarming rate. This cannot be attributed to genetics as it is happening within a short period of time and genetic change occurs slowly. It has to be environmental.

We know that sugar and salt are used to make foods taste better and these additives are found in every processed and packaged food. Carbonated soft drinks are the most popular vehicle for increased sugar consumption. The salt content in processed foods can be more than a 100 times higher that that in similar homemade meals.

The researchers state that,

Glucose was found to increase permeability and produce changes in distribution of the main protein of the tight junction in the human cell line Caco-2, indicating intercellular leakage.

…increased salt consumption is an enhancer of intestinal permeability through the TJ (tight junction) machinery.

As I always say, if you can’t pronounce what is on the label, don’t eat it.

It can be summarized that there are enough scientific observations concerning the emulsifier effects on breaching the integrity of the TJ, even at concentrations used in industrial food processing.

According to these researchers,

Per definition, a solvent is a liquid capable of dissolving another substance. The organic solvent chemicals are genuinely dangerous…Most of them have warning information on the labels as poisons. Examples of organic solvents used in industry are: benzene, xylene, toluene, turpentine, acetone, methyl/ethyl acetates, hexane, ethanol and several detergents.

Solvents are commonly used in the food industry for the extraction of active ingredients or removal of undesirable substances. This process generally involves use of commercial Hexane  which is typically used in the processing of vegetable oils like soy oil.

…several organic solvents used in the food and beverage industries, like alcohol and its metabolites impair the TJ (tight junction) barriers… The authors concluded that individuals with non-modifiable risk factors should avoid any exposure to organic solvents in order to avoid increasing their risk of ADs (autoimmune diseases).

Gluten is another commonly used food additive that has been found to contribute to leaky gut.

A number of in vitro studies have confirmed the cytotoxicity of gluten’s main antigen, gliadin. Gliadin has agglutinating activity, reduces F-actin content, inhibits cell growth, induces apoptosis, alters redox equilibrium and causes a rearrangement of the cytoskeleton through the zonulin pathway and the loss of TJ competence in the gastrointestinal mucosa.

I’ve written extensively about the numerous dangers of gluten.

Microbial transglutaminase (mTG) is another additive used widely in the food industry and is one of the fastest growing additives – used for improvement of meat texture, appearance, hardness and preservability, increased fish product hardness, improved quality and texture of milk and dairy products, decreased calories, improved texture and elasticity of sweet foods, protein film stability and appearance and improve texture and volume in the bakery industry. (source)

Read more about the glue in meat used in the catering industry.

Nanoemulsions manufactured from food-grade ingredients are being increasingly used in the food industry to encapsulate, protect, and deliver lipophilic functional components, such as biologically active lipids and oil-soluble artificial flavors, vitamins, preservatives, and nutraceuticals.

Additionally, nanoparticles are used to improve the taste, color, uniformity and texture of foods, as well as in food packaging to minimize leakage of CO2 from bottles or kill bacteria (silver nanoparticles embedded in plastic).

We do not know how these nanoparticles affect the human body.

In summary, the small size, high surface area, and high surface energy of nano-sized lipid particles may lead to effects in the GI tract that are not predictable from our knowledge on the behavior of micro- or macro-sized lipids.

Leaky Gut is Benchmark of Autoimmunity

Glucose, salt, emulsifiers, organic solvents, gluten, mTG, and nanoparticles are extensively and increasingly used by these industries to improve the qualities of the food (as claimed by manufacturers and some consumers). However, all these food additives increase intestinal permeability by bringing about TJ paracellular transfer. In fact, TJ dysfunction is common in multiple AD and the central part played by the TJ in AD pathogenesis has been extensively described.

I couldn’t agree more.This is what health conscious people and nutritionists have been saying for years! Now we have the science to back simple common sense!

I propose a BLACK BOX warning label on all processed food!

What about you? Are you concerned about the effects of food additives on your gut? Leave a comment and let me know!

For more information about healing the gut check out the FREE Heal Your Gut Summit starting January 18!

New Research: Impact of Food Additives on the Gut Microbiome