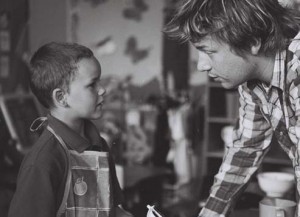 I really like Jamie Oliver. Some of his recipes are great. But what I particularly like about him is his activism and his commitment to making things better for kids. He is out there teaching kids and families a good message. The message is, freshly prepared foods are necessary to stay healthy.

He is expressly concerned (as we all are) about school lunches. Apparently he had a deal with a very large school district in Los Angeles (LAUSD). They reneged on the deal because Oliver also brings TV cameras and a lot of disruption to the school day. But in this district half of the kids are obese. That’s right. Half. Fifty percent of the students are obese. And most of them qualify for free lunch. Hmmm wonder how so many kids got so fat? Could it be from eating lunches that follow the USDA guidelines? I’m sure that is part of the problem, the other part being what they eat at home.

Some low income neighborhoods have few grocery stores and many fast food joints. It can be cheaper to buy that fast food meal than it is to buy fresh fruits and vegetables. When that situation changes, lower income families will have a fighting chance towards making healthier choices.

Jamie Oliver likes to “stage” his productions and this may be very disruptive to a school. However, he also planted a community garden, mentored culinary arts students, lectured about portion size, and diet-related disease, and set up a nearby community kitchen to give free classes in cooking real food like roast chicken. He clearly gives back to the community a lot. The kids love him and understand that he is trying to help.”They (the school district) think Jamie is the threat. The threat is diabetes …” said one of the high school seniors. That student has clearly learned something important.

Oliver calls his style “documentary with stunts.” For example, he filled a school bus with 57 tons of white sand to represent the amount of sugar LAUSD kids children consume per week, that is contained in flavored milk. Wow. That makes a very clear point, doesn’t it? The school district suggested that he lend his expertise by coming up with three weeks of meal plans, adhering to the district’s food budget of 77 cents per meal and state standards. I wouldn’t want to be charged with doing that. Especially the part about keeping to the “state standards”.  I can just imagine what that is… USDA guidelines?

Oliver is a busy guy. He is  setting up four more community kitchens around LA, funded by the American Heart Association at a cost of about $180,000 each, to offer free cooking classes, and will be taking his mobile kitchen set up in an 18-wheeler around Southern California. While we may not agree with the American Heart Association, at least he is reaching people who are really out of the loop when it comes to eating fresh foods. It’s a start. And, by the way, check out his recipe for homemade ice cream using raw milk and raw cream!

“I want the American public to expect more,” he said. “It might take a couple years to get there, but I’m deeply passionate that when everyone comes together, stuff changes.” In a statement about the food industry Oliver said, “They can make ethical change that will genuinely shift toward health and away from obesity”… Jamie Oliver is someone who clearly understands the fundamentals of the problem.