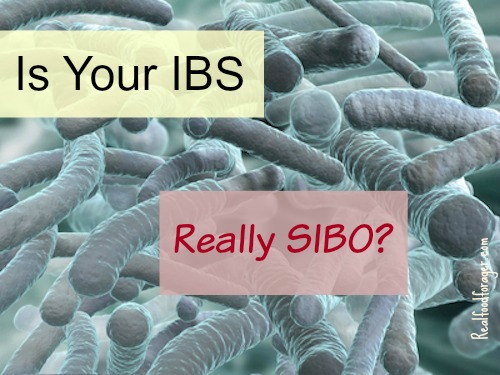 A common diagnosis from a gastroenterologist is irritable bowel syndrome (IBS). However, is your IBS really SIBO (small intestine bacterial overgrowth)?

IBS is a generalized diagnosis that is made by elimination of other conditions. By default. If your symptoms fit into one of the boxes that describe IBS then that is what you are told you have. But you are never told the real cause.

A diagnosis of IBS is not as serious as a diagnosis of IBD (inflammatory bowel disease) and the two should not be confused However, IBS can still cause significant upheaval, distress and disability in your life.

This is when normal bacteria that live in the large intestine move up into the small intestine where they do not normally reside.

How Does SIBO Occur?

Acute gastroenteritis, which is a disease onto itself, may be the number one cause of SIBO. It may also be called food poisoning, stomach flu, traveler’s diarrhea, when bacteria like salmonella, cholera, etc. get into the digestive system and overcome the immune system.

In order to get rid of these invaders, the body creates diarrhea. Acute gastroenteritis can also be the cause of death in 3rd world countries and clearly can be quite severe.

We all have probably had some form of gastroenteritis – children may experience this several times.

Acute gastroenteritis is caused by bacteria that secret a toxin called cytolethal distending toxin (CDT). This toxin has 2 portions. One of the portions (B portion), looks very similar to our nerve systems in the small intestine. Through molecular mimicry or cross reactivity, the body will attack both the toxin and itself and cause damage to the small intestine.

When the cells of the MMC are damaged, they no longer can clean and we get an accumulation of bacteria (normal or pathogenic) or an overgrowth of bacteria which is SIBO.

So acute gastroentieritis is an underlying cause of SIBO. There are other causes but it is the number one cause.

This has previously been known as post infectious IBS and has been studied numerous times over. There have been instances where an entire town has been infected with gastroenteritis due to contaminated water and there is plenty of documentation about this. It has been found that 50% of the people infected, go on to get post-infectious gastroenteritis or SIBO.

See the work of Dr Mark Pimental in his book The New IBS Solution.

Two Types of Motility in the Intestine

MMC is a downward and moving complex that occurs between meals and overnight and is meant to sweep away the remnants of the meal in between.

The other peristaltic movement is after a meal to move the food through the intestine. It is a mixing and churning movement to mix the food with enzymes and acids. Movement through the large intestine is separate.

Damage to the Migrating Motor Complex

Acute or chronic diseases (such as diabetes, scleroderma, idiopathic gastroparesis and hypothyroid) can either damage the nerves of the MMC or cause it to slow down.

Most people get SIBO from an intestinal infection (maybe after traveling). Everyone has a history of intestinal infection (as children) then maybe they develop hypothyroid and then they have a stressor like surgery or emotional stress. Pain medication can also slow the MMC. It can happen in many scenerios.

Testing can be performed at a gastroenterologist’s office. It is the Hydrogen Breath Test for hydrogen and methane.

If your doctor does not have kits in their office, a very good lab is Commonwealth Labs. you can order a test kit from them and have results sent to your doctor.

1- Main treatment is with an antibiotic – usually Rifaximin. Thankfully, this antibiotic does not affect the bacteria in the large intestine.

Prevention is key via:

2 – Prokinetics – natural is iberogast, ginger or MotilPro and pharmaceutical would be low dose erthromycin, low dose naltrexone or Resolor.

Motility Agents after Treatment for SIBO

It is critical to keep things moving in the small intestine in order to keep levels of bacteria down. Therefore, a prokinetic supplement or pharmaceutical is necessary. This is the primary reason why patients can relapse – they have not been put on a prokinetic.

Herbals include ilberogast (Europen), ginger, MotilPro (from Pure Encapsulations — can also stimulate large intestine motility). Prokinetics are also pharmaceutical but some have unsafe side effects. The safe ones are low dose erythromycin (50mg compounded), low dose naltrexone (also helps with motility and is anti-inflammatory) and Prucalopride (Resolor) – however this is not approved in the US.

Dr. Pimental has suggested that a patient should stay on motility agents for 3 months after treatment and then go off and see if they can maintain being symptom free. It’s not an exact science yet.

Other Causes of SIBO

Other causes include decreased motility as explained above, acute or chronic disease, obstruction in the intestine like scar tissue or a tumor or pocket like a diverticular or surgical blind loop. Any abdominal surgery can cause damage to the MMC.

Nerve damage to the MMC is a major cause and Dr. Pimental is researching a cure for damaged nerve cells. This is a difficult situation and is likely to relapse. A good clinician will have to address the possibility of relapse and that is why they prescribe motility agents in order to keep the small intestine cleaned and swept.

Beneficial bacteria via fermented foods can also be part of the treatment plan and would help to prevent it from happening in the first place.

Nourish a healthy gut with fermented foods. Avoid pharmaceuticals, especially antibiotics and other stressors. This also reduces the risk of autoimmunity.

Do you have SIBO? Have you received proper treatment for it?

Disclaimer: This is not intended to be medical advice. As with any treatment information, speak to your health care provider before making any changes to your diet and/or medications. See full disclaimer here.

Love Your Gut Microbiome and Feed It Prebiotics