How Gluten Affects Your Gut, Your Health and Puts You At Risk For Autoimmunity 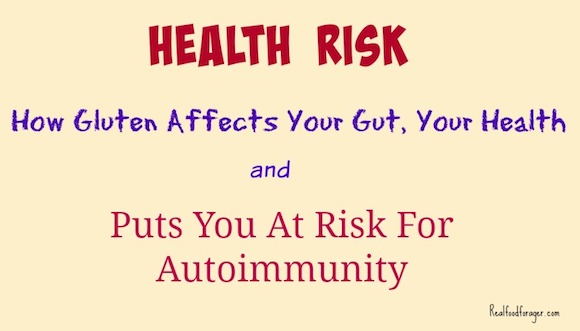 It is known that symptoms of gluten sensitivity may not only be gut symptoms. Find out how gluten affects your gut, your health and puts you at risk for autoimmunity.

Symptoms may be in the brain, joints, muscles, skin, and other areas, far removed from the intestine. It is a health risk if you are gluten sensitive – and you may be, even if you have had standard testing that is negative.

Sadly, the standard of care for identifying gluten sensitivity is far below what it should and could be.

The statistics are staggering – four to six people out of ten who have a health problem, will have a gluten problem.

The Umbrella of Gluten Related Disorders

Dr. Tom O’Bryan is known as the gluten doctor because he is an expert in gluten related disorders. Gluten Related Disorders is the new term that the experts are using for the vast array of problems that may arise from gluten sensitivity.

Gluten Related Disorders is the new term that is recommended by the International Celiac Symposium, because it appears that so many conditions are related to a sensitivity to gluten.

In the past and sadly, the present, there is a  problem in the diagnosis of gluten sensitivity, because doctors have been relying on tests that are not sensitive and are outdated. The standard testing is the following:

Wheat Allergy Testing – This is testing an immediate IgE reaction by skin prick test by an allergist. If the test is negative, they tell patients that eating wheat is fine for them. However, this test only indicates that you do not have an IgE (immediate) reaction to wheat. This is only testing one line of the immune system. There are many other lines to the immune system that can be reacting to wheat, but they need to be tested in a different way.

Most allergists STILL do not appreciate the fact that there are lines of IgE, IgG, IgM, IgA, etc. All of these lines need to be tested. According to Dr. O’Bryan it is 1980’s thinking when a doctor does not check the other lines of the immune system.

Dr. O’Bryan related a study he participated in Italy that was published in the American Journal of Otolaryngology in 2013, reversing Meniere’s disease on a gluten free diet. Of the 48 participants, 14 had IgE reactions – but the others did not. However, when the other parts of the immune system were checked (as explained above), all the other participants had a reaction to gluten in at least one line of their immune system.

The appropriate testing is critical.

Find out why conventional allergy testing is not accurate and not enough.

Celiac Disease – One person in every 100 will have celiac disease. The end point of this disease is when the microvilli in the intestine wear down and cannot function as a place for nutrient absorption. This occurs because of the inflammation from eating gluten.

Sadly, it is at this end point that celiac is typically diagnosed.

Celiac is an autoimmune disease where the immune system is attacking your own intestinal tissue. It is diagnosed by biopsy. However, there is a spectrum of development that can take years, but this is not taken into account or investigated. Functional medicine testing can uncover potential problems in the immune system years before a diagnosis of autoimmunity.

Sadly, standard medicine waits for the disease to be at its end stage, i.e., villus atrophy, in order to be diagnosed. It did not happen overnight. It takes years for villus atrophy to occur and during that time a person may have symptoms that are unrelated to the gut.

The current blood test – tissue tranglutaminase is elevated in celiac disease. But this test is not accurate when the villi are not completely worn down. If the test is negative, these unfortunate people are told they do not have a problem with gluten. The test is not a good test, but it is still the standard of care right now.

Non Celiac Gluten Sensitivity (NCGS) – This is the largest group of people. They may have brain, joint, skin or muscle symptoms, or even infertility. In this group it is the protein that is the problem for them.

Gluten intolerance is a term that the International Celiac Symposium is asking everyone to STOP USING. They ask that because people get confused that it is similar to lactose intolerance. Lactose intolerance is simply a lack of the enzyme lactase that causes the problem. You can take the enzyme (lactase) with your food and that will help you digest it and you will be fine.

This will not work with gluten. There are enzymes on the market, but you cannot take these enzymes – they will not work for this. Gluten sensitivity is much more than just the lack of an enzyme – it is an immunological reaction to the protein gluten.

Obesity occurs in 5% of celiac children.  Overweight (BMI of over 25) occurs in 44% of celiac adults, with a 5 to 1 ratio, women to men. Celiac women have a much greater occurrence of being overweight than men.

Celiac used to be categorized as a wasting disease with a person presenting as underweight. But, at this time, being sensitive to gluten is a contributing cause of being overweight.

When you have celiac, you are not absorbing fats. When you are not able to absorb the fats, you never feel satisfied and crave more food because the satiation hormone (ghrelin) is not secreted. This is the hormone that signals the brain that you are full and have enough nutrition. Consequently, you tend to eat more carbohydrates.  This turns to sugar and of course, leads to blood sugar problems.

Many people lose weight when going off gluten and grains. It is a fact that when you stop feeding your body the foods that you cannot absorb, you lose the excess weight.

Most people feel great when doing this.

Gluten and Gluteomorphines in the Brain

There is a small percentage of people that actually feel worse when avoiding gluten. This is because they have elevated peptides to the gluteomorphine receptors in the brain.

This makes gluten like a drug for them, because gluten stimulates the release of gluteomorphine. When that is removed, they feel bad for one to three weeks when going off grains. Many children on the autism spectrum have this problem.

Feeling bad when going off grains can also be because there is already tissue damage that may never heal or deeper toxicity that needs to be dealt with. Other problems may involve adrenal and thyroid function.

When this happens it is important to keep blood sugar stable, drink a lot of water and work with a clinician that is familiar with gluten issues. A functional medicine practitioner would be knowledgeable or a clinician who has trained with Dr. O’Bryan. You can find a list of certified gluten practitioners (CGP’s) at his website TheDr.com.

Some people have release water when going off grains. When you eat foods that are toxic to you, the body tries to dilute these toxins by retaining water. Take the offending foods away and the water comes out.

If you are gluten sensitive, even one exposure will cause the immune system to activate for 3 to 6 months. Another reason why the testing is important here.

Cyrex labs is the only lab right now doing this very specific type of testing. The blood test looks at multiple peptides of gluten.

According to Dr. O’Bryan, humans do not have the enzymes to break apart the peptides in wheat, rye and barley. Therefore, there are large peptides left undigested and this will trigger an inflammatory immune response.

This is the problem with gluten.

The standard blood test for gluten sensitivity only looks at alpha gliadin. Only 50% of celiacs have a reaction to alpha gliadin. This is an old test from the 1980’s.

Wherever your weak link is, that is where the symptoms will be. This is why only 8% of people have gut symptoms.

The literature shows that 50% of children with seizures will recovery when they go off gluten.

Cross reactive foods are foods that are similar in structure to an offending food like gluten. For instance, dairy is the most common cross reactive food that needs to be eliminated when you are gluten sensitive. Bacteria, viruses, instant coffee and gluten free grains can cross react and cause the same immunological response as gluten.

It is critically important to go off the cross reactive foods in order to heal.

In June 2014, the chair of the Celiac Society of Italy, Dr. Volta, published his research in the BMC Medicine Journal. There are 34 centers that are gluten related disorder centers and they all participated in a study looking for non-celiac gluten sensitivity.

Non-Celiac Gluten Sensitivity is real – the rumor that it is a fad is misinformed. Dr. Volta had this to say,

As a pioneer of non-celiac gluten sensitivity (NCGS), I can testify that until a few years ago this syndrome was surrounded by such skepticism as to be confined to a ‘no man’s land’.

However, awareness of the existence of NCGS has grown so much that nowadays this syndrome is recognized  all over the world. It’s one of the main topics at international gluten-related meetings, as it was at the 15th International Celiac Disease Symposium in Chicago last year. (source)

According to Dr. O’Bryan, gluten sensitivity is the primary trigger in the population that is thwarting the ability to achieve better health. If there are no GI issues, gluten is not considered to be a problem. But this can interfere with fixing any other health problem.

Find out how gluten can poison the thyroid, especially if you are celiac or gluten sensitive.

It is clear that if you have a health condition that involves being overweight, involves your gut, joints, skin or brain or if you have an autoimmune disorder you need to investigate whether or not gluten is at the core of the problem. You may be suffering needlessly because no one has investigated a gluten sensitivity.

Find a functional medicine practitioner or alternative clinician that can run the appropriate tests from Cyrex Labs. This lab is running state of the art testing for many peptides of gluten and can accurately predict gluten sensitivity.

Here again, you need to be your own health advocate and learn all you can about what is happening in integrative and alternative medicine. It is critical to try to identify this type of problem to prevent it from becoming a full blown disease. That is the goal of alternative health care – prevention.

Have you had issues that have turned out to be a sensitivity to gluten? Leave a comment and let me know!