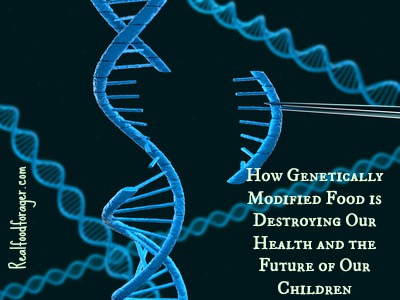 GM foods are an experiment. Here’s how genetically modified food is destryoing our health and the future of our children.

The average American is consuming their body weight equivalent in genetically modified foods each year. This constitutes an experiment on the American population, because there are no long term safety studies.

However there are quite a few studies that show problems and health issues with genetically modified foods.

Glyphosate is the active ingredient in Roundup. It is a non selective herbicide that was patented in 1964 as a strong metal chelator. That means that it grabs hold of elements, i.e. minerals, and makes them unavailable. It binds up calcium, cobalt, copper, iron, manganese, magnesium, nickel, boron and zinc.

The purpose of glyphosate is to disrupt plant physiology so that they cannot grow and can’t defend themselves against disease. The plants die as a result of the diseases they may acquire — indirectly from the glyphosate.

Glyphosate is systemic.  It takes only one drop sprayed on any part of the plant and it goes throughout the entire plant. A minimum of 20% of glyphosate that hits the foliage is exuded through the plant’s root system directly to the soil.

It stays in the soil. Pretty much forever.

Glyphosate works by inhibiting specific enzymes called cytochrome P450 enzymes. These enzymes play a critical role in the detoxification of xenobiotics. Even a tiny dilution of glyphosate caused DNA damage in epithelial cells.

Xenobiotics are endocrine disruptors and they trigger inflammation.

Glyphosate is Biologically Disruptive to the Environment

There is a ton of science behind the toxicity of glyphosate. Check out a few of these published studies:

In Environmental Toxicology and Chemistry, 2014,  Majewski et al, found pesticides in Mississippi air and rain. Glyphosate and it’s degradation product, AMPA were detected in more that 75% air and rain samples in 2007.

The AMA is against labeling GM foods. Clearly there is a disconnect between the research and the politics.

The EPA standard for glyphosate in American water supplies is 0.7 ppm. In Europe it is 0.2 ppm. GM corn contains up to 13 ppm.

I don’t eat corn anymore for several reasons, but the fact that corn is genetically modified (if it is not organic) is foremost.

Glyphosate is the most biologically disruptive chemical to the environment .

There has been an increase in salmonella and clostridium in chickens due to decrease in beneficial lacto bacteria due to glyphosate.

A review article published in April 2013, in the peer-reviewed journal, Entropy, by Drs. Seneff and Samsel indicates that glyphosate, the active ingredient in Monsanto’s Roundup, has been found to be pervasive in the food supply.

Seneff and Semsel postulate that interference with the cytochrome P450 enzymes, creates a synergistic disruption,

of the biosynthesis of aromatic amino acids by gut bacteria, as well as impairment in serum sulfate transport. Consequences are most of the diseases and conditions associated with a Western diet, which include gastrointestinal disorders, obesity, diabetes, heart disease, depression, autism, infertility, cancer and Alzheimer’s disease.

In total, glyphosate is the worst thing that has ever happened to the earth and Monsanto and the law makers who are in their pocket completely deny these problems.

Toxins in Our Waterways

According to Ken Cook, president of the Environmental Working Group, The Food and Drug Administration doesn’t regulate the environmental spread of pharmaceuticals. And the toxic substances law ignores their presence in waterways.

There are 15,000 new chemicals and biological sequences registered every day.

Deborah Swackhamer, a professor of environmental health sciences at the University of Minnesota, investigated the chemistry of the nearby Zumbro River. She found traces of pesticides in the water. She also found prescription drugs ranging from antibiotics to the anti–convulsive carbamazepine.

Researchers realized more than 15 years ago that pharmaceuticals – excreted by users, dumped down drains – were slipping through wastewater treatment systems.

According to the EPA there are over 1 billion pounds of pesticides applied to US soils and plants annually. Of these, 60% are known endocrine disruptors.

Memorize the Dirty dozen listed at the Environmental Working Group and avoid this produce unless it is organic.

Avoid toxins in skin and personal care products as well as cleaning products.

Accumulation of chemicals in the adipose tissue

How to Support Detoxification

In Phase 2 detoxification there are 6 conjugation pathways. These include, glutathione  conjugation, amino acid conjugation, methylation, sulfation, acetylation and glucuronidation.

Dr. Terry Wahls, in her book The Wahls Protocol, advices people following her diet to eat 9 – 12 cups of assorted vegetables a day in order to provide minerals, polyphenols and anti-oxidants. Dr. Wahls cured herself from MS via diet and now she is conducting research to prove the diet works! You go girl!

While we make glutathione in our bodies (the most powerful detoxifier), sometimes we don’t make enough or it is broken down too quickly. S-Acetyl-glutatione is the best glutathione supplement for supporting detoxification. Liposomal glutathione is also better absorbed.

Other supplements include CoQ10, chorella, Vitamins A and D (best in cod liver oil) just to name a few.