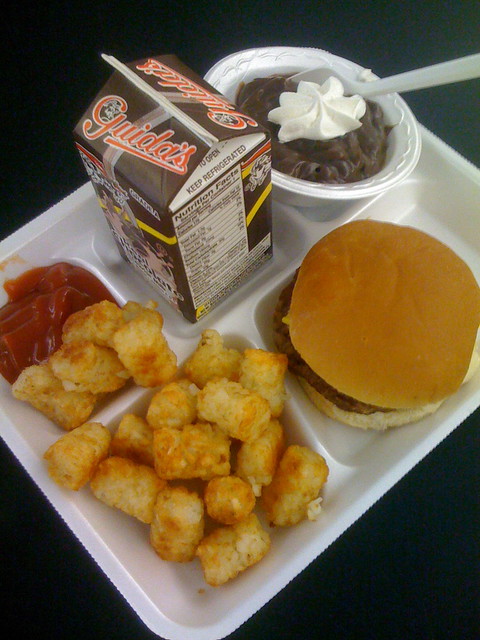 Based on the 2009 recommendations of the National Academy of Sciences and endorsed by Agriculture Secretary Tom Vilsack and the Obama administration, the USDA has proposed to limit potatoes, restrict the use of sodium and increase the use of whole grains in school lunches. This, in an attempt to reduce the growing incidence of childhood obesity.

While these proposals may appear “healthier” to some, this is totally misguided. If the goal is to indeed reduce childhood obesity, much much more has to be done. More like a total revamping of the USDA guidelines. Throw out the white bread, the sugary cereals, snacks and condiments and especially the low fat milk.

Listen to the video below of Sally Fallon Morell (Founder of the Weston Price Foundation) addressing the new USDA Guidelines in a press conference this past February 2011 and get the real deal for healthy eating. Here is the second part of the talk. It is really worth the time.

Learn why butter and salt are good for you. See why the USDA-recommended “low-fat, high-fiber, low-salt diet,” is contributing to cancer, heart disease, obesity, infertility, low-growth rate, diabetes, and a whole host of other health problems — and, according to Sally Fallon Morell, “impossible to eat”.

This Valentine’s Day Press Conference was held in Washington, DC sponsored by The Weston A. Price Foundation, and included the Nutrition and Metabolism Society and members of the Healthy Nation Coalition.

The conference was held to expose the flaws and misuse of science in the formation of our nation’s dietary guidelines, which have resulted in a 30-year decline in our nation’s health. The Weston Price Foundation is extremely concerned about the health of Americans, especially the children. It’s mission is to teach appropriate food choices based upon the wisdom of traditional cultures who enjoyed superior health.

The final version of a spending bill released this week diminishes the standards proposed earlier this year. Specifically, the bill would:

-Block the Agriculture Department from limiting starchy vegetables, including corn and peas, to two servings a week. The rule was intended to cut down on french fries, which many schools serve daily. They are also fried in rancid vegetables oils which no one seems to notice.

– Allow USDA to count two tablespoons of tomato paste as a vegetable, as it does now. The department had attempted to require that only a half-cup of tomato paste could be considered a vegetable. Federally subsidized lunches must have a certain number of vegetables to be served. Some still think high fructose corn syrup ketchup is a good vegetable!

-Require further study on long-term sodium reduction requirements set forth by the USDA guidelines. Apparently they don’t know that humans and all mammals require salt and salt is not the reason for childhood obesity.

-Require USDA to define “whole grains” before they regulate them. The USDA rules require schools to use more whole grains. Here is where they can sort of make it up as they go along, with bogus definitions of what a whole grain actually is.

Not surprisingly, the lobbyist for the potato growers, frozen food manufacturers and other food conglomerates that provide school lunches have fought long and hard against any changes.

This agreement ensures that nutrient-rich (my italics) vegetables such as potatoes, corn and peas will remain part of a balanced, healthy diet in federally funded school meals and recognizes the significant amounts of potassium, fiber and vitamins A and C provided by tomato paste, ensuring that students may continue to enjoy healthy meals such as pizza and pasta.

said Kraig Naasz, president of the American Frozen Food Institute. Who does he think he is kidding?

USDA spokeswoman Courtney Rowe said that the department will continue its efforts to make lunches healthier and she stated,

While it’s unfortunate that some members of Congress continue to put special interests ahead of the health of America’s children, USDA remains committed to practical, science-based standards for school meals.

If it wasn’t so sad it would be laughable. This generation of children doesn’t stand a chance. My solution has been to send my kid to school with lunch from home. But that doesn’t help the other children who will eventually suffer from the poor quality food they eat. What are you doing to teach others? Please leave a comment and let me know!