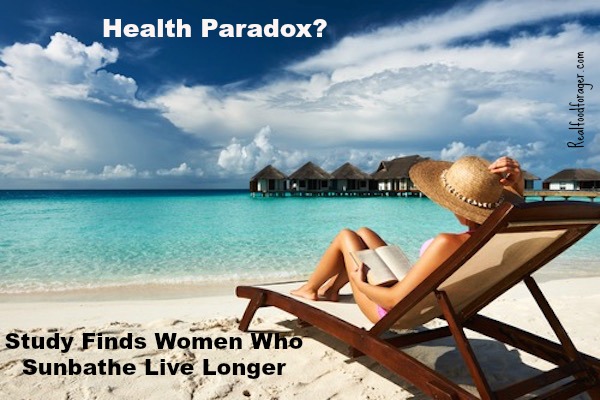 A recent study found that women who sunbathe live longer and have less risk of heart disease and non-cancer/heart disease deaths. Is this really a paradox?

Consider the French Paradox, where, in spite of eating saturated fats and smoking, the French have much less heart disease than Americans.

Cholesterol has gotten a bad rap. Your total cholesterol number is useless and the same goes for the HDL and LDL.

Find out which blood test is the most important for health – not cholesterol!

Cholesterol is a building block for the formation of Vitamin D when the sun hits your skin. You need both to make sufficient Vitamin D.

Oxidized LDL is Another Underlying Cause of Heart Disease

While most people have been taught that LDL is the bad cholesterol, it is really the oxidized LDL that is problematic. In this study published in 1998, Kummerow et al showed that oxidized LDL contributes to heart disease by increasing the synthesis of thromboxane in blood platelets, thereby increasing blood clotting.

For years conventional medicine said to stop eating butter because it has saturated fats. However, many studies now show that it is the trans fats that are the culprit. If you are eating packaged foods made with hydrogenated, or partially hydrogenated oils, you are eating trans fats.

In view of the French Paradox not being a paradox at all, lets look at the study published in the Journal of Internal Medicine, March, 2016, that found that women who sunbath are likely to live longer than those who avoid the sun. I will mention that the investigators did find that sunbathers are at an increased risk of developing skin cancer.

This may have been due, in part to statistics, because the study analyzed 29,518 Swedish women who were followed for 20 years and because of the decreased risk they found for non-cancer/non-heart disease deaths – the relative number of deaths due to cancer increased.

The researchers found that,

It seems that sun exposure is protective for cardiovascular disease (CVD) as well as non-cancer, non-CVD.

Interestingly, the research showed that,

… smokers at approximately 60 years of age with the most active sun exposure habits had a 2-year longer life expectancy during the study period as compared to smokers who avoid sun exposure.

There was also evidence that those with the highest sun exposure were are increased risk for skin cancers. That said, after an analysis of various other studies on skin cancers as a measure of sun exposure, the authors of this study concluded,

… Thus, it seems that sun exposure causes an increased incidence of NMSC (nonmelanoma skin cancer) and MM, (malignant melanoma) but not a decrease in life expectancy. Thus, when analyzing factors that affect life expectancy, such as sun exposure, (i) results from case–control and cross-sectional (prevalence) studies must be interpreted with caution and (ii) not only should the incidence of NMSC  or MM be reported, but also data on all-cause risk of death should also be provided. (my emphasis)

Importance of Vitamin D to Cancer

Vitamin D is protective against certain types of cancer including melanoma. This study published in the European Journal of Cancer found that melanoma patients who exposed themselves to sunlight had a better survival rate than patients who did not. They found that intermittent sun exposure was inversely associated with the risk of death in melanoma.

Interesting. Melanoma is the most serious type of skin cancer yet sun exposure seemed to help.

All of this said, I conclude that sun bathing is important to heath – likely due to the high levels of Vitamin D one can achieve.

It’s important to get some sun exposure every day if you can. Of course if you live in places that are cold most of the time this will limit you. However, if you live in a warm climate, or at least during the warm months, you can try to get sun exposure in a sensible way to build up a tan.

The most important thing is to avoid sunburn because this has been associated with skin cancer. Sunburn can occur without your knowing it because it can take a few hours for it to blossom. So be very careful when you are out in the sun.

My goal is to get a bit of sun exposure each day for just a few minutes without any sunscreen or block, in order to start to build up a tan. After a few days of just 15 – 20 minutes, I will start to tan.

I have more of a Mediterranean type skin so I will tan. Those of you who have more delicate skin and lighter coloring will need to expose yourself for maybe 5 minutes a day until you can start to build some color, because you are at higher risk of sunburn compared with people with darker-colored skin.

I also use a wide brim hat to block sun from my face as I do not want any sun on my face. I would rather not get the wrinkles from sun exposure on the skin of my face as that skin is much more delicate then the skin on my body.

If you need to block the sun, use hats and light weight shirts, and find some shade.

After I get a good tan and I want to stay in the sun for a longer period of time I will then apply a sunscreen without the toxic chemicals. These may not work as well, so I will also be more vigilant at these times. I also seek out shade, and if I go to the beach I bring a beach umbrella.

My favorite thing to do to relax in the summer is to sit at the beach for a few hours. I enjoy the sound of the waves rolling in, I get grounded, feel revitalized and feel great after a day at the beach!

What do you think? Do you sunbath? Leave a comment and let me know!

Read more about the benefits of sensible sun exposure here.