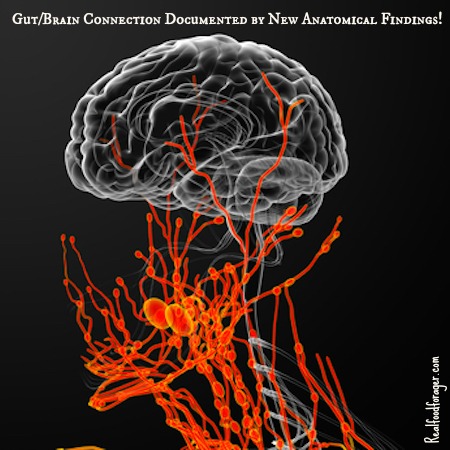 The gut/brain connection is documented by new anatomical findings thanks to the latest in technology and brilliant researchers!It’s hard to believe that we can actually still be discovering new anatomical relationships after all these years of advanced imaging technology.

Researchers at the University of Virginia School of Medicine have mapped the anatomical connection between the brain and the immune system via vessels that have never been imaged previously!

This incredible discovery adds an entirely new dimension and approach to neurological disorders such as, Alzheimer’s, MS, autism, Parkinson’s, ALS, etc. Since the immune system is primarily in the intestines, this connects the gut and the brain and will certainly lead to novel approaches to the treatment of these disorders.

This is what nutritionists and functional medicine doctors have been saying for years. As a chiropractor, I’ve been instructing my patients on the connection between the brain and the body my entire career. Now we have the anatomy to prove it!

These newly discovered vessels are part of the lymphatic system and are called meningeal lymphatic vessels.

Jonathan Kipnis, PhD, professor in the UVA Department of Neuroscience and director of UVA’s Center for Brain Immunology and Glia (BIG) said,

It changes entirely the way we perceive the neuro-immune interaction. We always perceived it before as something esoteric that can’t be studied. But now we can ask mechanistic questions… We believe that for every neurological disease that has an immune component to it, these vessels may play a major role… Hard to imagine that these vessels would not be involved in a [neurological] disease with an immune component.

This is a discovery that will change the textbooks and the way the lymphatic system is taught.

Antoine Louveau, PhD, a postdoctoral fellow in Kipnis’ lab made the discovery. The vessels are easy to miss unless you know what you are looking for and it has been taught that the lymphatic system does not go into or around the brain – it stops around the neck and occiput.

They discovered that these vessels follow a major blood vessel down into the sinuses and are placed within the meningeal compartment. The meninges are the membranes that cover and protect the brain and spinal cord.

Now, any and every neurological disease can be reevaluated through the lens of the lymphatic system and its functional role in health, disease and aging.

Autoimmunity and the Brain

Hindsight is 20/20. Now we can look at many brain disorders through the lens of autoimmunity because the lymphatic system is part of the immune system.

There has been so much recent attention to mental disorders such as depression, bipolar disorder, ADD, ADHD, autism, etc. In functional medicine, the connection has always been to the gut – where most of the immune system resides.

Recently I wrote about the connection between the vagus nerve, inflammation and the gut and a simple new modality that can decrease inflammation in other parts of the body.

The vagus nerve is actually two nerves, right and left, but is usually referred to as one. It is the tenth cranial nerve and travels from the medulla oblongata in the brain through the neck and chest to the abdomen. It enervates tissues and all the major organs along the way.

Of course, you don’t want to cut your vagus nerve – you want to control how it transmits TNF throughout the body. It will be interesting to see if any of this research is applied to the new knowledge we now have of the immune system surrounding the brain and how that affects us functionally.

The discovery of the central nervous system lymphatic system may call for a reassessment of basic assumptions in neuroimmunology and sheds new light on the aetiology of neuroinflammatory and neurodegenerative diseases associated with immune system dysfunction.

Interestingly, these researchers are not talking about the gut/brain connection they, in fact,  just made.

Here again, science has shown that there is a connection between the brain and the intestine. It doesn’t take much to realize that this certainly involves what goes into the gut, i.e. food.

It is becoming clear that the food you put into your body matters in any health condition no matter how unrelated it seems to be.

What do you think about this new finding? Are you as excited about it as I am?

Get my free series, Getting Started, to kick off your real food journey!

Early Detection of Alzheimer’s is NOT an Effective Treatment