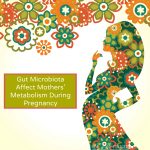 Pregnancy is a time of major metabolic change. Researchers have found that gut microbiota affect mothers’ metabolism during pregnancy.

Research published in the journal Cell, studied changes in gut flora during pregnancy. In this groundbreaking study, researchers found that in the third trimester of pregnancy, there are changes in the gut flora that would normally be associated with the gut flora of people with metabolic syndrome.

While this may seem dire, these changes during pregnancy may benefit the fetus.

Researchers found that gut flora in women in the first trimester was similar to that of nonpregnant healthy women and men. However, by the third trimester, the gut flora of the pregnant women changed dramatically from the other two groups.

In the third trimester, the gut flora was composed of different species and varieties and these families of bacteria had a major influence on the women’s metabolism.

They found an abundance of Enterobacteriaceae family and Streptococcus genus in the third trimester, while in the first trimester there was an abundance of the Clostridiales order of the Firmicutes, such as Faecalibacterium – a beneficial butyrate producer with anti-inﬂammatory effects.

Metabolic Changes are Seen in Pregnancy

Generally, the diets of the women, including total caloric intake, did not change over time, but from the first to the third trimester, the women gained fat (as expected in pregnancy). However, they also had higher levels of circulating glucose, leptin, insulin, cholesterol and increased insulin resistance.

These elevated markers are typically found in people with metabolic syndrome.

Metabolic Changes in the Third Trimester are Healthy

In the context of pregnancy, these metabolic changes in the mother are healthy, because they promote energy storage in fat tissue and help support the fetus… outside of pregnancy, however, these changes can lead to the development of type 2 diabetes and other health problems.

Microbiome of Breast Milk also Changes over the Course of Lactation

Interestingly, researchers have found that the microbiome of breast milk also changes over the course of lactation.

In this study published in the Journal of Clinical Nutrition, breast milk samples were taken from colostrum, from the first month and the sixth month. The researchers noted that the human milk microbiome changed over the course of lactation.

The researchers noted that the milk of obese mothers had less diversity and that milk samples from elective, but not from nonelective mothers who underwent cesarean delivery, contained a different bacterial community than did milk samples from individuals giving birth by vaginal delivery.

This suggests that it is not the c-section so much as the absence of physiological stress or hormonal signals ( in the case of elective c-section where the hours and hormonal changes associated with labor are not experienced) in the mother that could influence the microbial species in the milk.

Read more about how Your Baby’s Microbiome Starts With the First Sip of Breastmilk.

The takeaway here is that the microbial communities change with changing metabolic circumstances (pregnancy and breastfeeding) and seriously affect the host – especially during pregnancy.

This is an example of how the innate wisdom of the body, which allows the body to prepare and change in order to support the developing fetus, is actually controlled by the symbiotic relationship we have with our gut flora.

Here is another example of the exploding field of microbiome research taking place today.

Learn how to nourish and nurture your microbiome and the root causes and triggers for dysbiosis, which can be the root cause of your health condition.