Ginger is the Best Natural Remedy for Menstrual Cramps 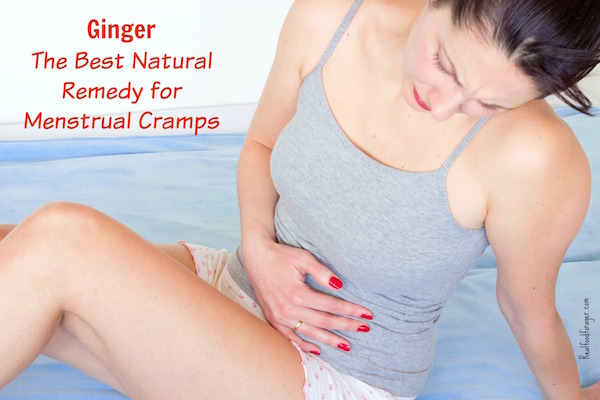 Ginger has been known to alleviate the nausea from pregnancy and motion sickness. Studies show that ginger is the best natural remedy for menstrual cramps.

Ginger is the Best Natural Remedy for Menstrual Cramps

I wish I had this information when I was menstruating (OK, OK I’m really dating myself here), because, back then, I had terrible menstrual cramps (also known as primary dysmenorrhea).

I always thought that was normal.

Each and every month.

I remember powering through those days in spite of the pain. In chiropractic school, I would grab a hot pack for my abdomen and lie on the table, in between seeing patients.

I didn’t want to resort to ibuprofen or aspirin.

Ginger is a Powerful Anti-Inflammatory

We have known for ages that ginger acts as a powerful anti-inflammatory and is effective in pain relief.

For instance, this double blind study published in 2009, looked at the efficacy of ginger, ibuprofen, and the NSAID mefenamic acid, for relief of pain from primary dysmenorrhea in women age 18.

The study, published in the Journal of Alternative and Complementary  Medicine, used 250 mg capsules of ginger root powder four times a day for three days from the start of the menstrual period and compared it to 250 mg mefenamic acid or 400 mg ibuprofen capsules, following the same protocol.

They found that the ginger was just as effective as the pain killers. The authors concluded that,

Further studies regarding the effects of ginger on other symptoms associated with dysmenorrhea and efficacy and safety of various doses and treatment durations of ginger are warranted.

And there have been further, more recent studies.

Another study published in the Archives of Gynecology and Obstetrics in 2015 also compared the effect of mefenamic acid and ginger on pain management in primary dysmenorrhea.

And here is yet another study, a meta-analysis (a study that looks at other studies on the subject), published in Pain Medicine in 2015 that looked at the efficacy of ginger for alleviating the symptoms of Primary Dysmenorrhea (menstrual cramping).

The researchers came to the conclusion that,

Collectively these RCTs provide suggestive evidence for the effectiveness of 750-2000 mg ginger powder during the first 3-4 days of menstrual cycle for primary dysmenorrhea.

These journals are juried medical journals that are available to any primary care, gynecologist, obstetrician or other doctor that cares to read them. It appears the ginger is the best natural remedy for menstrual cramps.

How Does Ginger Decrease Inflammation?

There are several mechanisms that have been repeatedly confirmed in the scientific literature.

However, there are some cases in which ginger should not be used. Ginger may thin the blood, so if you are taking a blood thinner or have a clotting problem, you should consult with your health care provider about taking ginger.

There is also some small controversy about taking ginger when pregnant, so you should read this conventional approach to taking ginger.

As I always say, you have to be your own advocate when it comes to which treatment option you choose. It’s best to pick the most natural, effective option that comes with a history of thousands of years of use and no adverse effects.

Have you tried ginger as a remedy for pain relief or menstrual cramps? Leave a comment and let me know!

While ginger may help in mitigating the pain of menstrual cramping, there is usually an underlying problem of hormone imbalance that should be addressed.

Menstrual cramps are also an indication that the thyroid hormone (which orchestrates ALL the hormones) may be out of balance.

Learn more about your thyroid here:

Here are some recipes using ginger: