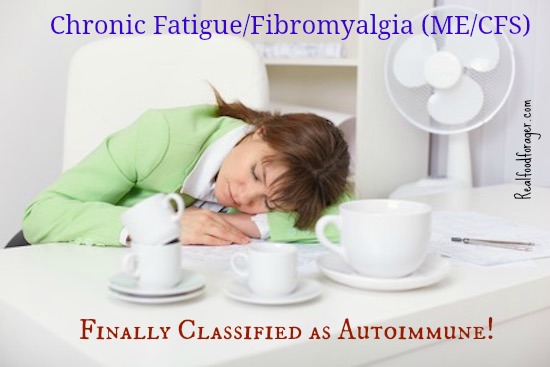 Finally chronic fatigue and fibromyalgia are finally classified as autoimmune!

When I first started practicing, the medical community did not recognize chronic fatigue. They told patients, it’s all in your head.

As nutritionists/chiropractors, of course we helped patients with adjustments and good nutrition and helped them realize they were not crazy. Now, not only is the syndrome and all its corresponding symptoms recognized, it has been reclassified as an autoimmune disease!

Also known as Myalgic Encephalomyelitis (ME)/Chronic Fatigue Syndrome (CFS), as well as Chronic Fatigue Immune Dysfunction Syndrome (CFIDS), there have been recommendations for yet another name change to Systemic Exertion Intolerance Disease (SEID), with better established diagnostic criteria, by the Institute of Medicine in a report in 2015.

It is a compilation of various symptoms commonly reported as post-exertional malaise (PEM), unrefreshing sleep, concentration problems and muscle pain that typically lasts at least six months. Most folks with this problem have it for years.

Back in the early 2000’s it wasn’t taken seriously and patients found themselves going from one doctor to another trying to find answers.

Patients complained of unrelenting fatigue especially after any kind of activity. There was also the pain – unrelenting muscle pain in various parts of the body. I remember one patient who had MRIs of every part of his body trying to find out where the pain was coming from.

Sadly, they missed the key area of origin – the immune system and the brain. Back then we didn’t have the scanning technology we have today.

Thankfully today we have evidence that this disorder is not all in the head at all.

Well, it is a little.

People with CFS had a slightly lower volume of white matter, which connects regions of gray matter in the brain. They also had very high fractional anisotropy (FA) values, a measurement of water diffusion, in a specific white matter tract of the brain called the right arcuate fasciculus.

Another abnormality appeared in the cortex – an area of the brain that connects to the right arcuate fasciculus. In CFS patients the cortex was thicker than in the brains of the control participants.

According to the reserachers, these structural differences could indicate brain inflammation.

Researchers at Columbia University’s Mailman School of Public Health have found that ME is a physical disease that may be triggered by an infection and in susceptible people, linger on as a hyper-stimulated  immune response and become autoimmune.

This study, published in the journal Science Advances, involved analyzing the blood plasma samples of 298 CFS patients and 348 people without the disease.

Those who had the disease for less than three years had higher amounts of different types of inflammatory cytokines such as interleukin-17A.

High levels of interleukin-17A are associated with many chronic inflammatory conditions, such as multiple sclerosis, psoriasis, and rheumatoid arthritis.

These seemingly unrelated diseases – neurological, skin and joint diseases are in fact all autoimmune.  Autoimmunity is really one disease process, but may be expressed in many different tissues and systems in the body.

People with autoimmunity commonly complain about chronic fatigue. With these study results we are able to connect the dots and help people more completely.

Big Pharma is jumping on these discoveries with more biologic treatments. These biologic drugs may help some folks but have some pretty serious side effects and are very costly.

These two important studies have brought us much further along in our understanding of ME and CFS. Now that it is classified as an autoimmune disease we can forge ahead with natural treatments that can help turn down the inflammation.

Natural Treatments for Autoimmunity Based in the 4R Approach

This approach attempts to uncover the actual cause and imbalances in each individual rather than simply putting a bandaid on the symptoms. Each individual has their own set of imbalances and this needs to be corrected in a specific and individual way. Using conventional medicines that suppress the symptoms may be necessary alongside the integrative functional approach while healing is going on.

More and more there are chiropractors, naturopaths and functional medicine doctors that take this approach. As always, never change your diet, medicines or supplements without involving your health care provider.

See more of my disclaimer here.

Click here to receive my FREE Getting Started on your Real Food Journey email series and a grain-free recipe book!