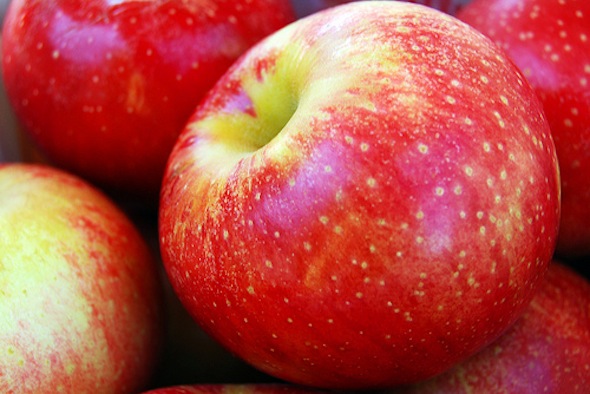 Every year the Environmental Working Group (EWG) publishes their “dirty dozen” list of  fruits and vegetables. Beware the poisoned apple.

Of the dirty dozen, this year, apples are at the top – the worst in pesticide residues.

Next are celery, strawberries, peaches and spinach. Of the “clean” group, onions are first, followed by sweet corn (however, I would not eat corn that is not organic as it is most likely GM), pineapples, avocado and asparagus.

They found that you could actually reduce your exposure to pesticide residues by over 90% if you buy only from the clean 15 list. If you are following the new “My Plate” suggestions by the USDA, and filling your plate with lots of fruits and vegetables (5 or more a day) you really have to be very careful of the pesticide exposure.

The methodology used to determine pesticide contamination, for the Shopper’s Guide, is based on an analysis of 51,000 tests for pesticides conducted by the USDA and the FDA on 53 popular fruits and vegetables. The tests were conducted on produce after it had been rinsed or peeled.

This seems to be a thorough measure of the many different pesticide chemicals that may be used. The produce was then ranked according to the six scores each type of produce received and then normalized on a 1-100 scale with 100 being the highest.

Another alternative is to grow your own organic vegetables — but since I am a suburban forager in the northeast, I can only grow a small amount of seasonal vegetables which leaves me foraging in the stores for the rest of the year! This list really helps!