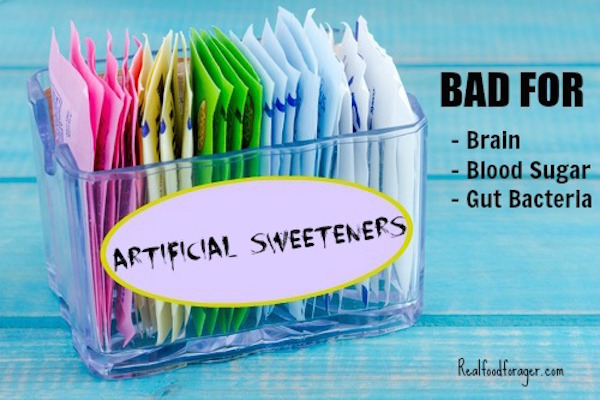 Studies show the very negative effects these artificial sweeteners have not only on the brain, but also on the microbiome and glycemic control!

What are the Artificial Sweeteners?

The most commonly used artificial sweeteners are saccharin (Sweet and Low),  sucralose (Splenda), and aspartame (Equal and Nutrasweet). They are recommended to people with prediabetes, diabetes, and obesity because they have no calories and we cannot digest them, yet they can taste up to twenty thousand times sweeter.

Artificial sweeteners are found in many common processed foods such as commercial yogurts, diet sodas and other commercial drinks, cereals, packaged foods and sugar-free desserts. They are medically recommended to people with type 2 diabetics, but new research shows that recommendation needs to be reevaluated.

We have known for years that these artificial sweeteners are carcinogenic, neurotoxic and cause many seemingly unrelated effects on people – especially children. In fact, saccharin was taken off the market for a while due to its cancer causing properties.

In turn, the food industry has responded by providing new sweeteners to take the place of sugar, which creates so many health problems. While that would seem to be a good idea, these artificial sweeteners have a slew of problems of their own.

Artificial Sweeteners – Bad for the Brain

Aspartame is the chemical in Equal and Nutrasweet and we have known for years that it affects the brain. The controversy exists because it is a huge money maker for food manufacturers and FDA approved, in spite of the numerous studies that show adverse reactions to this chemical.

Aspartame is composed of phenylalanine (50%), aspartic acid (40%) and methanol (10%). Phenylalanine is involved in neurotransmitter regulation and aspartic acid is considered to be an excitatory neurotransmitter. Aspartic acid is also a precursor to glutamate, asparagines and glutamine. Methanol, is converted in the body to formate, which can be excreted or may produce formaldehyde (carcinogenic), diketopiperazine (carcinogenic) and a number of other highly toxic derivatives. Although it is only a small percentage of the product, methanol can be quite toxic for some people.

For instance, this study published in Biological Psychiatry was halted by the Institutional Review Board after only 13 people completed the study. They halted the study because of the severity of reactions within the group of patients with a history of depression. The researchers concluded that,

individuals with mood disorders are particularly sensitive to this artificial sweetener and its use in this population should be discouraged.

In this review study published in the European Journal of Clinical Nutrition, researchers studied the effects of aspartame on the brain. They noted that neurological and behavioral disturbances such as, headaches, insomnia and seizures have been reported in previous studies. They recognized that these problems are due to changes in brain concentrations of neurotransmitters, such as, norepinephrine, epinephrine and dopamine.

The researchers also noted that,

excessive aspartame ingestion might be involved in the pathogenesis of certain mental disorders (DSM-IV-TR 2000) and also in compromised learning and emotional functioning.

Participants on the high aspartame diet were found to have more irritable mood, exhibited more depression, and performed worse on spatial orientation tests. The researchers concluded,

Given that the higher intake level tested here was well below (my emphasis) the maximum acceptable daily intake level of 40-50 mg/kg body weight/day, careful consideration is warranted when consuming food products that may affect neurobehavioral health.

That said, there are many studies, like this one, that show the safety of ingesting aspartame, thus the controversy. Personally, I cannot go near aspartame as it gives me headaches. As a clinician, I have found quite a few patients that were relieved of headaches, depression and brain fog when they stopped using all aspartame products.

Sadly, with the low fat edicts from the government, many people have jumped to buy only low fat, low calorie processed food – much of which is flavored with aspartame.

Researchers at the Weizmann Institute of Science in Rehovot, Israel, discovered that artificial sweeteners not only do not prevent diabetes but,

might actually be contributing to and possibly driving the epidemic that it aims to prevent (my emphasis).

After 11 weeks, the mice were given a glucose tolerance test and blood samples were taken. The researchers found that the group drinking the artificial sweeteners had blood glucose levels spiking higher than both control groups and that also took longer to drop back to normal. This shows glucose intolerance or dysglycemia or prediabetes – call it what you will.

The researchers wiped out the gut bacteria of mice who had been given saccharin, by giving them antibiotics. This seemed to cure the glucose intolerance.

The researchers further investigated by transferring the gut bacteria of mice who had consumed saccharin into mice whose guts were bacteria-free – a fecal transplant.

The last part of the experiment studied a small group of humans who were given the highest allowed daily dose of saccharin. For a person weighing 150 pounds, this would be equivalent to three to four sachets of sweetener taken three times per day (yikes)!

While this is a very small sample, in conjunction with the results from the mouse studies, it is clear that the artificial sweeteners are affecting glucose tolerance as well as gut bacteria in a very negative way. With all the research going on regarding the microbiome (including the effects of food additives on the microbiome), this is showing just how much our gut bacteria are involved in every metabolic process in our body.

Sure, more studies are needed, but there are already plenty that show a very detrimental effect by artificial sweeteners on health in general.

Drink This and Risk Stroke