Early Detection of Alzheimer’s is NOT an Effective Treatment 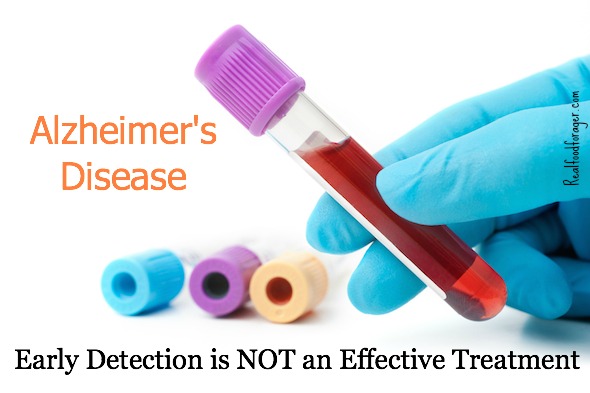 It’s all over the news – researchers have found proteins in blood that may help develop a blood test to predict Alzheimer’s disease (AD). But early detection of Alzheimer’s is not an effective treatment, because there are no adequate medical interventions.

Early Detection of Alzheimer’s is Not an Effective Treatment

The drugs for Alzheimer’s  that are on the market, simply do not work well, because they do not address the cause of Alzheimer’s. The key is prevention and a natural treatment that will surprise you!

Early detection is a boon for Big Pharma as they could offer and sell medications years earlier and keep selling them.

But do these medications work?

The research for this new blood test comes out of King’s College London and was published in Alzheimer’s & Dementia: The Journal of the Alzheimer’s Association.

It’s estimated that 5.1 Americans have AD and rates are expected to triple by 2050. (source)

This is a devastating diagnosis to have with a poor prognosis and heart breaking for everyone involved.

At the present, there is cognitive testing that may be performed, but the standard of care is to use MRI of the brain and/or PET Scan with radioactive dye in order to detect amyloid plaques in the brain.

It is becoming clear that the amyloid plaques that have previously been associated with AD are not the cause of AD. We know that because all the current medications for AD address amyloid plaques and they do not improve the condition.

A simple, non-invasive blood test would be helpful as another added piece of information.

Currently, there are 5 approved drugs on the market and according to these doctors, writing in Pharmacy and Therapeutics,

These five drugs are supportive or palliative rather than curative or disease-modifying therapies, and they do not appear to alter the final outcome of the disease.

In other words, the treatment does not work to prevent the progression of the disease.

Additionally, there has been a firestorm of controversy over some of the drugs because they do not appear to do very much at all and carry a huge cost.

Furthermore, there are the side effects and other unwanted effects to taking a drug that may or may not be helping.

This is a Health Care — Caregiver Crisis

Health analysts make a dire estimate. They predict that in just five years the number of Americans with Alzheimer’s will jump to 7.7 million and by 2050 the number is projected to more than double to 16 million. So why is this disease growing so rapidly?

Conventional health officials talk about how our population is aging and more people are living longer, in order to explain these alarming statistics.

However, the rapid rise of chronic illnesses in middle aged people (and children) has paralleled the increase of thousands of additives in our food supply and the switch to a “Fast Food Nation.”

What Your Doctor Will Not Tell you About Alzheimer’s

A large percentage of the population is sensitive to gluten and this is a major reason for brain shrinkage. This can set you up for brain related conditions from Alzheimer’s and dementia to depression, headaches and even schizophrenia.

Two Conditions that Cause Brain Degeneration

These processes kill brain cells — particularly in the memory centers of the brain — the hippocampus.

Big pharma has rushed to produce a drug that prevents the breakdown of acetycholine, but it does not work very well.

We need to address the actual cause of the shrinking of the memory center of the brain — the hippocampus. It is affected by free radicals, which cause oxidative stress — just like a piece of iron rusting  and disintegrating — the brain cells diminish when under oxidative stress.

Anti-oxidants counter the damaging effect of free radicals to tissues. Anti-oxidants may be superfoods such as cod liver oil for the vitamins A and D, organ meats, raw milk as well as certain berries, and supplements such as CoQ10 (also found in heart), astaxanthin (found in wild salmon) and vitamin C.

Three Major Actions You Can Take To Prevent Alzheimer’s

There are three major actions you can do to help prevent Alzheimer’s disease.

In a study funded by the National Institute of Health and published in the New England Journal of Medicine in 2013, researchers found that carbohydrates dramatically increased blood sugar and increased free radicals.

Researchers were testing blood sugar and mental decline. In a median followup of 6.8 years they found a significant increased risk of dementia in direct correlation to blood sugar even in non diabetics! The researchers concluded,

Our results suggest that higher glucose levels may be a risk factor for dementia, even among persons without diabetes.

Take this message and act on it. Now is the time for prevention, not when it is already detected.

2 – Stop eating gluten and most grains

While some people continue to think that properly preparing grains by sourdough fermentation, soaking and/or sprouting is the simple fix to this problem, the reality is that the immune response to gluten is much more complicated.

While proper preparation of grains is very important for the people who can tolerate them, those who have an immune reaction to gluten will be creating inflammation that can affect all areas of the body from the digestive tract to the joints, the skin and the brain.

When blood sugar is even mildly elevated it raises glycation. The glycation process is when sugar binds to proteins. When this happens it increase free radicals and the glycated proteins increase the process of inflammation. This is devastating for the human brain.

Inflammation is fundamental to the cause of Alzheimer’s, (also known as diabetes type 3). A high carb diet leads to modification of proteins (glycation) that leads to damage to DNA.

Read more about what Dr. Perlmuter, a practicing neurologist, has to say about the relationship of sugar and carbohydrates to brain conditions.

Investigations on the effects of the medium chain triglycerides in coconut oil, on neurological diseases such Alzheimer’s, show benefits. Other research shows coconut oil to benefit epilepsy.

Fats are categorized as either short-, medium-, or long-chain depending on how many carbon molecules they contain. Close to two-thirds of the saturated fat in coconut oil is made up of medium-chain fatty acids, which have antimicrobial properties, are easily digested by the body for quick energy, and are beneficial to the immune system.

Far from being dangerous, the saturated fat in coconut oil is actually health promoting.

Dr. Mary Newport used coconut oil to treat her husband’s severe, early onset Alzheimer’s with great success. Her article, What if There Was a Cure for Alzheimer’s Disease and No One Knew? is a must read if you or a loved one is confronting this relentless disease. It will give you actionable alternatives and hope for the future.

Read more about how she used coconut oil to treat Alzheimer’s.

Coconut oil is delicious and can be used in many ways for cooking and baking.

Using these three strategies, you can improve your health greatly and prevent not only Alzheimer’s but any number of other diseases of our modern world.

If you or a loved one was diagnosed with mild cognitive impairment what would you do? Would you take the drugs or would you investigate these alternative methods? Will you wait for the blood test to be approved, or will you be proactive with your health?

Is Amyloid Plaque Really the Culprit in Alzheimer’s and Dementia?