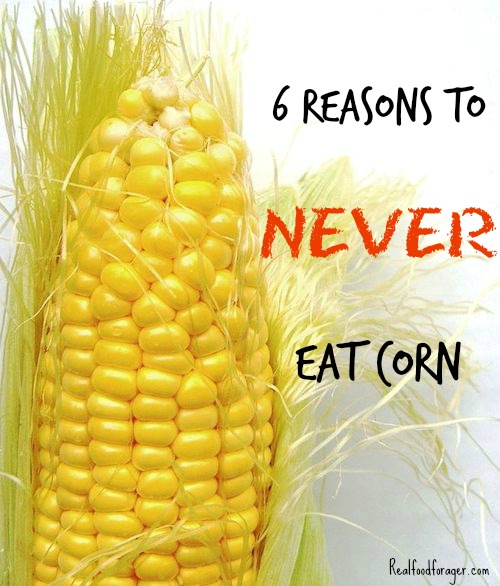 Corn is the go-to for people who cannot tolerate wheat or gluten. It makes sense – it is gluten free. However, corn can be an irritant for some people. Here are 6 reasons to never eat corn especially if you are celiac or gluten sensitive.

Folks who have to suddenly take gluten out of their diet are usually starch eaters and need to have a replacement. While it seems like a good replacement, there are actually several problems with corn that you need to know about especially if you are celiac or gluten sensitive.

There is an issue called cross reactivity, which can occur when someone produces antibodies to a particular food, like gluten. The proteins in other foods have similar structure to the protein in the original reactive food (in this case gluten).

Cross reactivity occurs when the person’s overly alert immune system starts attacking those similar proteins as well. This causes increased damage to the gut lining and leads to leaky gut. The proteins leak into the bloodstream and incite further immune reactions that may even become extra-intestinal – reaching places like the joints or skin.

It is important to test other foods like dairy products as well. Unfortunately, going gluten free may not completely resolve the symptoms until cross reactivity with other proteins is investigated.

The researchers also found that these amino acid sequences may also bind to the IgA antibodies that are produced by the body when gluten is ingested by someone who is intolerant or is celiac. They further found that this activation may occur in those people with the celiac genes, HLA-DO2 and HLA-DO8.

Clearly, these people should not be eating these other grains.

Dairy, coffee and other legumes like peanut and soy are also prone to this activation.

We are aware that genetically modified foods such as, GM corn and GM soy, cause damage and inflammation to intestinal cells. In genetically modified corn and cotton, a gene from the Bacillus thuringiensis bacteria (Bt) is inserted into the cells of the plant. This causes a pesticide to be produced in every cell of the plant. This Bt-toxin kills insects that eat the plant by breaking down their gut lining – killing their bacteria and the insects eventually starve.

This tissue damage is fatal for insects and cannot be good for humans. Additionally, the Bt corn causes dysbiosis in humans because of its capacity to harm the microbiome.

People can have issues with GM food regardless of their sensitivities. The corn, soy, cottonseed and canola crops are over 90% GM in this country. Additionally, sugar beets, papaya and some other crops are GM to a lesser extent.

Aside from the intestinal damage issue with GM foods, these crops are highly sprayed with glyphosate, a pesticide now considered to be a probable carcinogen.

Corn is High In Omega 6

Corn is high in omega 6 fatty acids, which are pro-inflammatory.

Leukotrienes are indicative of inflammation.

Molecular mimicry is similar to cross reactivity. However, in this case, a person reacts to the food, because the structure of the food itself is similar to a body tissue.

For example, gluten can be similar to certain people’s thyroid gland and this will cause the immune system to start to attack it. Muscle, joint and endocrine glands (pancreas and thyroid) are most affected by this.

Molecular mimicry may also occur in response to a bacteria or pathogen.

Sensitivity to mold exposure is more prevalent in celiacs because they eat a lot of corn products. The type of mold that contaminates most corn is fumonisin.

Mold causes immune system problems and many other problems. People who eat corn are getting low doses of mold on a consistent basis and so can continue to have health problems.

The symptoms are similar as having a yeast infection – autoimmune problems, joint pain, asthma, irritation around eyes and nose, sinus infections, brain fog, skin reaction like eczema and at its worst, cancer.

This study published in Molecular Nutrition and Food Research evaluated the fumonisin levels in the diets of people with celiac. They found that the fumonisin intake in the celiac patients was significantly higher than in controls. They also found that the typical diet of a celiac patient was high in sweets and soft drinks and low in vegetables, iron, calcium and folate. The researchers concluded that,

These findings may have serious health implications for the celiac population due to the widespread occurrence of fumonisins in most of the widely consumed gluten-free products, leading to continuous exposure to this particular mycotoxin. Moreover, the recorded nutritional quality of the celiac patient’s diet raises concerns regarding its long-term adequacy and its potential impact on chronic conditions such as type 2 diabetes and cardiovascular diseases.

This is a major reason why some people do not get well on a gluten free diet.

Corn contains several different types of glutens (proteins) that may be reactive.

In fact, this study published in BMC Gastroenterology, demonstrated that celiac patients that were still symptomatic (refractory celiac disease) in spite of adhering to a gluten free diet, were actually suffering from trace contamination of gluten from products containing corn. Once off these products as well, the patients improved.

Rules to Live By if  You Are Celiac

For some people going gluten free is just not enough. They need to go grain free and also need to heal their gut with traditional bone broths and other dietary interventions.

Unfortunately, the gluten free food industry is worth billions and they will continue to come up with new ways to call junk food, health food. Those who are intolerant have to be proactive and watchful.

You might be interested in How Gluten Affects Your Gut, Your Health and Puts You At Risk for Autoimmunity.

If you just can’t tolerate grains of any kind you may want to check out my online class: Go Grain Free!

Celiac Disease is The Perfect Storm for Autoimmunity

Grains and Gluten are the New Offenders For Sure