4 Under Utilized Tests for Inflammation in the Body 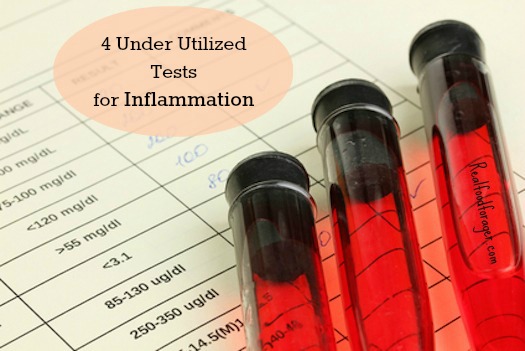 Inflammation is at the root of many chronic diseases. Here are 4 under-utilized tests for inflammation in the body.

Inflammation is a Root Cause of Disease

Antibiotics and other modern medicines have helped us control acute inflammatory injuries and acute infections, but we are now suffering from epidemics of chronic degenerative disorders that are affecting children as well as adults.

Many chronic disorders have an insidious component, in that, they creep up on you unawares with vague and seemingly unrelated symptoms. Suddenly you have specific symptoms and a diagnosed disease.

It is becoming accepted in the medical community that chronic inflammation is at the heart of many of these disorders. It can affect any organ, tissue or cell in the body because it is generated from the gut.

Inflammation Arises from the Gut

Chronic systemic inflammation arises from the gut because the immune system resides in the gut. Inflammation is caused by white blood cells and other reactive components.

Read more about what produces inflammation in the body.

This test is normally used to assess blood sugar levels in diabetic patients, however, some doctors do include it in routine blood testing.

This test is coming to the forefront as a key test to indicate health and longevity. Dr. Perlmutter, a leading integrative neurologist and author of Grain Brain has indicated that it is

… one of the greatest predictors of brain atrophy.

Once a hemoglobin molecule is glycated, it remains that way. A buildup of glycated hemoglobin within the red blood cell, reflects the average level of glucose to which the cell has been exposed during its life of 90 days. Measuring glycated hemoglobin is also used to monitor the effectiveness of therapy in diabetes by observing long-term serum glucose regulation

If you remember, glycation is the process whereby glucose, proteins and certain fats become tangled together. This causes tissues and cells to become stiff and inflexible .

Glycation is a critical biochemical abnormality that occurs alongside many chronic diseases and inflammation in general. (source)

Chronic inflammation can be triggered by elevated blood sugar levels and the oxidative stress of glycation. This is a principal indication of health status that needs to be included in routine blood testing and interpreted as an indicator of inflammation as well as blood sugar control.

It is becoming clear that fructose (especially high fructose corn syrup) raises uric acid, and uric acid inhibits nitric oxide bioavailability. Insulin requires nitric oxide to stimulate glucose uptake.  Studies show if there is a lack of nitric oxide due to inhibition by increased levels of uric acid, this leads to fructose-induced hyperuricemia which may have a pathogenic role in metabolic syndrome.

Dr. Richard Johnson is the chief of the division of kidney disease and hypertension at the University of Colorado, and author of  The Sugar Fix, one of the best books on the market on the dangers of fructose.

According to the latest research in this area, the safest range of uric acid is between 3 and 5.5 milligrams per deciliter, and there appears to be a steady relationship between uric acid levels and blood pressure and cardiovascular risk, even down to the range of 3 to 4 mg/dl.

Dr. Johnson suggests that the ideal uric acid level is probably around 4 mg/dl for men and 3.5 mg/dl for women. He feels that serum uric acid may be used as a good indicator of sensitivity to fructose.

Homocysteine is an amino acid that is produced as part of the methylation process in the body.  It is also a marker and risk factor for cardiovascular disease, and may increase bone fracture risk.

Homocysteine has been studied for years and is clearly a predictor of potential health problems. Raised serum homocysteine levels both predict and precede the development of cardiovascular disease including stroke.

This study published in the British Medical Journal clearly shows that homocysteine levels in blood plasma predicts risk of death from cardiovascular disease in older people even better than conventional measures of risk such as, cholesterol, blood pressure and smoking.

Homocysteine is not obtained from the diet, instead, it is biosynthesized from methionine via a multi-step process that occurs in every cell of the body. Methionine is sourced from protein foods such as eggs, fish, chicken and meat.

Not to get into the complex biochemistry, suffice it to say that homocysteine and methionine work in a complex cycle that is highly dependent on vitamin cofactors, such as B12, folic acid and B6.

If these needed vitamins are not present, dangerous homocysteine levels and potential ill health can result.

If homocysteine is found to be high, the simple fix is to provide the body with the nutrients that allow the elimination (conversion of homocysteine back into methionine) of too much homocysteine.

These nutrients include folate, B12, B6 and B2, zinc and trimethylglycine (TMG).

The normal range for healthy individuals is considered to be 5 – 15 µmol/L. However levels as low as 6.3 µmol/L may pose an increased risk. Additionally, each 5 µmol/L  increase in levels can increase the risk of coronary heart disease events by approximately 20%.

Allergy testing is one way to access the immune response to environmental triggers. This would include immediate IgE allergy testing from a conventional allergist for food and environmental pollens. IgE allergies are easy to identify because you will have immediate symptoms after contact with an allergen. Symptoms can range from mild issues such as runny nose and watery eyes all the way to life threatening anaphylactic shock. IgE allergies are indicative of acute inflammation that can readily resolve once the allergen is removed (except in the case of anaphylaxis).

However, to get the bigger picture, delayed hypersensitivity IgG and IgM testing will indicate allergies that are not so easy to identify. These tests would indicate an immune response to foods and other allergens that may not show up on traditional IgE testing. This tests another component of the immune system that can really elucidate a problem.

If you have delayed sensitivity allergies and do not know it, there will always be a low level of inflammation in the body. The immune response (and any symptoms) with these types of allergies can take days to develop which makes it very difficult to identify which foods are bothersome.

If you cannot locate a doctor that will test you for these allergies, an elimination diet is also a good way to identify them. Simply remove the food group in question (it must be the entire food group) for 5 to 7 days. When you are ready to reintroduce the food group, have a good portion of it. If there is a problem with this food group you will probably have symptoms within 24 hours.

You can test all the food groups in this way.

Other conventional tests for inflammation include Sedimentation Rate and C-Reactive Protein. There is also a stool test called Fecal Calprotectin that is used to rule out inflammatory bowel disease in order to identify patients that may need further  endoscopic examination for diagnosis.

There is also advanced testing of cytokines (usually used in research) that would require a specialized lab. These can get expensive and so would not routinely be used.

At your next physical exam, ask your doctor to include these tests with the rest of your blood work. Have you done any of this testing already? Leave a comment a let me know!

Fecal Calprotectin is an Important Marker of Inflammation in the Gut