3 Risks Your Doctor Won’t Tell You About Mammography 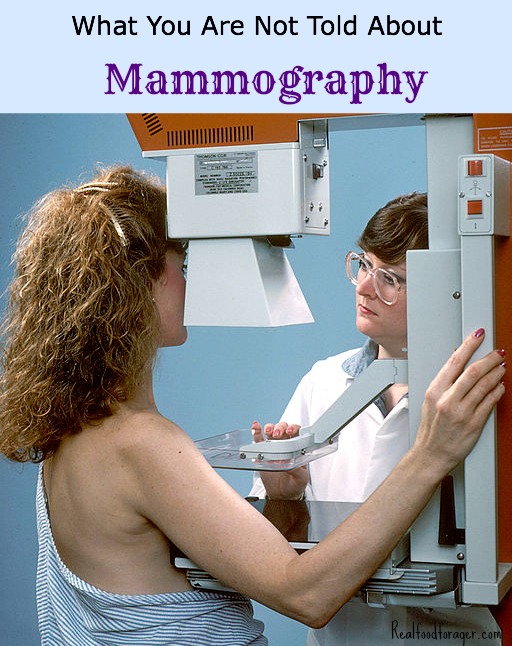 Mammography is not a way to prevent breast cancer. Here are 3 risks you doctor won’t tell you about mammography.

As soon as friends and family heard about my family member’s breast cancer diagnosis at age 32, they all ran to their doctor to get a mammography.

Even back 20 years ago I was concerned about several aspects of the procedure. Recently there have been studies that indicate that I wasn’t wrong or foolish to hesitate.

With ALL medical procedures you have to weigh the risk versus the benefit. Sadly, most doctors do not tell patients the extent of the risks. Mammography has some major risks that are now being addressed in the scientific community.

That mammography is ionizing radiation is the first, most obvious risk. In this study published in Radiation Research in 2002, the investigators concluded that the low dose of radiation used in mammography appears to be more harmful that the type of radiation associated with emissions from atomic bombs.

In this study published in the Journal of Radiological Protection in 2009, the investigators state,

Evidence highlighting the increase in relative biological effectiveness (RBE) of mammography x-rays to a range of x-ray energies implies that the risks of radiation-induced breast cancers for mammography x-rays are potentially underestimated by a factor of four.

Scientists have become more vocal in questioning the reported risks of low dose radiation in mammography. In this study published in the British Journal of Radiology in 2006, the scientists state,

Recent radiobiological studies have provided compelling evidence that the low energy X-rays as used in mammography are approximately four times–but possibly as much as six times–more effective in causing mutational damage than higher energy X-rays.

Additionally, breast tissue (as well as glands and organs) are more sensitive to radiation than extremities. It’s one thing to x-ray an are or a leg when there is a valid reason such as a fracture — quite another to consistently x-ray an organ or other sensitive tissue as part of a screening tool.

Furthermore, compression of the breast is a very bad thing to do, especially if there is a tumor. This can break up the cancer cells and accelerate the spread of the cancer. Not to mention how painful it is.

Unnecessary Further Testing Due to Benign Findings on the Mammogram

Imaging the breast may reveal several findings that cause the need for further  evaluation. There may be micro-calcifications, dense breast tissue or a mass that cannot be identified, irregular tissue growth such as lumps, fibroadenomas, or breast cysts.

When these conditions are seen on mammography, they have to be further evaluated. That means more x-ray views, i.e., more radiation to the breast.

Finally, an invasive, painful, surgical biopsy may need to be performed to evaluate the actual cells for pathology.

All of this creates an extremely stressful situation for the patient and her family and in most cases it turns out to be for naught.

As with all medically approved accepted techniques and tools there comes before it a web of interrelationships between the politicians who approve the grant money, the research institutes who parcel out that money to their labs, the interest groups and other economically driven relationships between government and business that drive the approval of any new breakthrough in medicine.

Make no mistake about it, it much more than just trying to save lives.

Recently, the Journal of the American Medical Association published a viewpoint article about the epidemic of over-diagnosis and over-treatment of cancer.

This study in the New England Journal of Medicne in 2012, entitled, Effect of Three Decades of Screening Mammography on Breast-Cancer Incidence, concluded that,

Despite substantial increases in the number of cases of early-stage breast cancer detected, screening mammography has only marginally reduced the rate at which women present with advanced cancer. Although it is not certain which women have been affected, the imbalance suggests that there is substantial overdiagnosis, accounting for nearly a third of all newly diagnosed breast cancers, and that screening is having, at best, only a small effect on the rate of death from breast cancer.

Furthermore, the investigators found that,

They go on to say,

Our study raises serious questions about the value of screening mammography. It clarifies that the benefit of mortality reduction is probably smaller, and the harm of overdiagnosis probably larger, than has been previously recognized. And although no one can say with certainty which women have cancers that are overdiagnosed, there is certainty about what happens to them: they undergo surgery, radiation therapy, hormonal therapy for 5 years or more, chemotherapy, or (usually) a combination of these treatments for abnormalities that otherwise would not have caused illness. (My emphasis)

Women should recognize that our study does not answer the question “Should I be screened for breast cancer?” However, they can rest assured that the question has more than one right answer.

Something to think about.

A Move to Change the Definition of Cancer

As published in the Journal of the American Medical Association, July 2013, a working group at the National Cancer Institute recently recommended changing the definition of cancer and eliminating the word from some common diagnoses as part of an overhaul to our approach to cancer detection and treatment.

Case in point is ductal carcinoma in situ which is the earliest form of breast cancer and is noninvasive. Many experts agree that that this is not cancer and should not have the term carcinoma as this is misleading and frightening to patients and may lead to extreme and potentially harmful treatments — such as chemo, radiation and even mastectomy.

The recommendation of this prominent group of scientists, which includes some of the top scientists in cancer research who have the backing of the National Cancer Institute, is a step into the future.

The concern is that many lesions detected during breast, prostate, thyroid, lung and other cancer screenings will never progress into anything malignant and should not be called cancer at all. They suggest a reclassification of these lesions as IDLE conditions, —  indolent lesions of epithelial origin.

With highly sensitive advanced technology we are finding more of these incidentalomas — or incidental findings detected during medical scans that most likely would never cause a problem. However, once a lesion is detected, it is necessary to go forward with more testing and treatment as this is standard protocol.

These slow growing lesions cause hundreds of thousands of men and women to undergo needless surgeries and treatments that will harm them years later.

This leaves us with more questions than answers. As the researchers stated above, this does not answer the question “Should I be screened for breast cancer?” That is a personal choice that you have to make. These are some facts that you may want to consider before going for that yearly mammogram.

As always, have a discussion with your personal medical provider for your particular circumstances. See more of my    disclaimer.

What Do the New Guidelines for Mammography REALLY Tell Us?